Still Inside: The Tony Rice Story 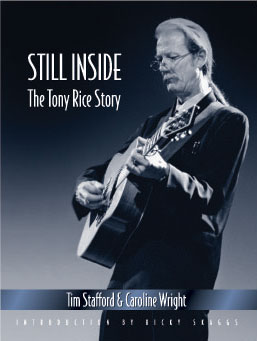 This month’s read for moi is going to end up being one of my favorite books of this decade. Not only does it cover the story of Tony Rice from a semi-autobiographical perspective, but Tim Stafford adds sections in the book about Mr. Rice’s choices of guitar, strings, picks, and discussions on his technical and aesthetic styles.

If I weren’t actually interested in the guitar but came to the subject strictly as a Bluegrass fan, I would still insist on having this book in my collection. The story is engaging in its own right, but the accompanying photography at all stages of the story is rich and compelling.

The book is structured into chapters in which Mr. Rice and his immediate family/friends tell his story somewhat chronologically; each chapter has its own section at the end where people involved in the story are quoted one-to-two paragraphs worth of reminiscences at a time. These end-of-chapter quotes actually comprise the bulk of the book’s content, and can be read at your convenience… not like a mystery thriller where you sit and read for seven hours solid.

There are parts of Tony Rice’s story in his own words that speak to me directly and have already begun to make me a better bluegrass guitar bandmate. Case in point, he’s talking about coming to work for JD Crowe for the first time; JD is using him to replace a recently departed Doyle Lawson.

"I think Crowe is a very good boss. When I joined this band, there’s no doubt about it, I was an inferior musician when it came to playing rhythm in time. … You can imagine, here’s JD Crowe coming out of the school of Jimmy Martin’s rhythm guitar, which has never been excelled by anyone on this planet that I know of. And Doyle was an amazing rhythm guitar player…

"I think JD has mentioned this before in various interviews; somehow Jimmy Martin taught him what he wanted, and how he wanted his own bluegrass sound to be distinct. Martin taught Crowe how to play with that drive."

I had to read this a few more times, before I realized that what I was reading was talking to me directly and worming its way through my head and making itself at home there. "Martin taught Crowe how to play with that drive."

Well, I want somma that! I want to put some drive into my rhythm playing. In fact, if I had the choice (not that there’s any real basis for a choice like this, but…) between being able to bring Jimmy Martin skills to a band and provide drive versus bringing Tony Rice skills to a band and provide jawdropping breaks, I think I would choose to emulate Jimmy Martin; more bands need a guitar player with drive than they need a Tony Rice pick-alike. Of course, that’s just me. There’s an industry full of pseudo-Rices out there that have dedicated their lives to sounding like Tony Rice. I guess that’s what happens when you’re the most influential guitarist of your generation.

But I digress. The Tony Rice story isn’t finished, of course. But what there is thus far, is enormous enough in depth and scope to touch every one of us who picks up a guitar with the intention of picking some bluegrass. Nothing helps put his influence on YOU as a musican or student into reasonable perspective like learning about the man himself, his music, and his saga.

I picked up my copy of this book from “Word of Mouth” Press. Cost with shipping was around thirty dollars. They had it to me in about four days.

Wow, I should have asked for that for Christmas!!

I was at the Mall yesterday and I ran across onna those Mall Santas on break. He thought he was all cute and everything and said to me “And what do YOU want for Christmas, young man?” So I told him “I wanna sound like Jimmy Martin on guitar.”

So he reached into his back pocket and handed me his little flask of Jack Daniels.