Spoke briefly to Gina Furtado the other month

This is a long time coming, but my work and travel schedule has been heavy lately, and have had little time for interaction on the forum (and practicing banjo) lately. So, anyway back on November 30, 2019 the Gina Furtado Project played in Savannah, GA near where I work. Technically, it was in Bloomingdale, GA at Randy Wood Music https://www.randywoodmusic.com/ where he has a nice little theater he calls the Pickin’ Parlor. It’s a 110-seat performance hall. Not a bad seat in the house. The next section of text comes from his webiste:

"…by the early 1970s, Randy had built a mandolin for Bill Monroe, added inlay work to Johnny Cash’s and Elvis’ guitars, been 1/3 of the trio that started what eventually became the now-famous Gruhn Guitars, and opened the original Old Time Pickin’ Parlor in Nashville.

Wood sold the business in 1979 — and he and Irene moved back to Georgia. For 22 years, they lived on the Isle of Hope; Wood considered himself semi-retired, and ran a woodshop, and a small mail-order business, out of the garage (“As long as UPS can find me, I’ll be all right”).

As more and more people moved into the area, however, he began to yearn for something more “rural.” Ten years ago, he bought four acres on Highway 80, built a house, a workshop and a retail store."

Now, back to my story…some time back, I somehow came across some comments on Facebook about Gina Furtado, and recognized her name as being a featured artist being showcased at the IBMA award events. Later, when I saw she was coming to the Pickin’ Parlor I was excited when I realized I would be in town and I could attend. She recently formed a new band and calls it the Gina Furtado Project, and I can tell you without a doubt that she has assembled an incredible team of very talented individuals! 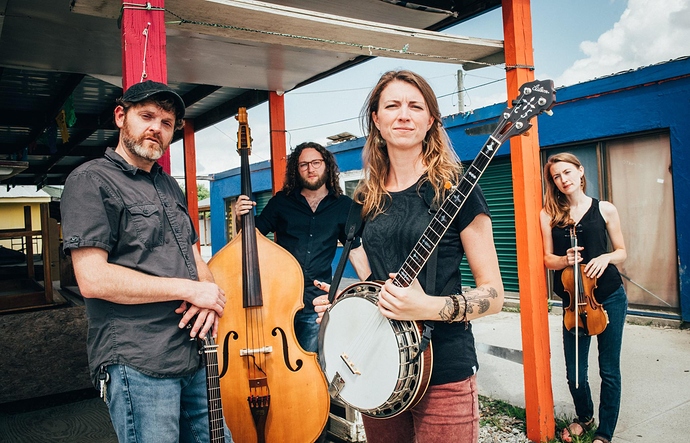 Her sister, Malia Furtado, is on fiddle and has played clasical and bluegrass since early childhood…and is even an instructor, and they are from Virginia. The bass player, Max Johnson, is an accomplished performer based in New York and has a strong Jazz background that comes through on some of his melodic passages. The guitar player, Drew Matulich, grew up in Georgia, and has toured and recorded with Billy Strings.

The night before the performance, I happened to see a Facebook post about Drew Matulich’s birthday. When sitting down in the theater, I realized I had sat down in front of a woman who was not at tall as myself and decided to slide over to the next seat so as to not block her view. She was with another woman and a gentleman. A few moments later someone tapped me on the shoulder, and it was the woman I had originally sat in front of, and she thanked me for moving and commented as to how unusual it was to have someone do that. Anyway, a conversation ensued while we waited for the performance to begin (I was a little early), and it turned out that I sat in front of the parents of Drew Matulich, and his fiance. I mentioned having seen his birthday cake on Facebook and we had fun talking about it. He sat down next to his dad for a few minutes before taking stage and I wished him a happy birthday. 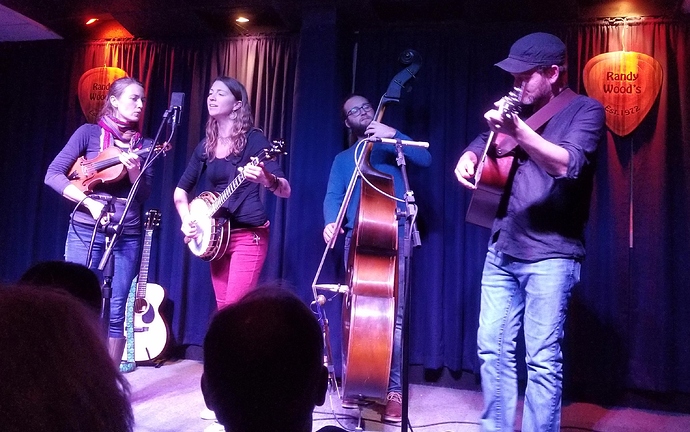 They played mostly original tunes, featuring Gina’s style and lyrics. She would often describe the background behind each song, she told us a little about her children, and it all made for an interesting and intimate performance. Each member of the band was featured at times, and all had a little story to tell. Every once in a while, they would throw in a traditional bluegrass song into mix in with the eclectic, sometimes jazzy, sometimes bright, and sometimes mournful story Gina had to tell.

During the break, Gina was at a table selling some CD’s, so I made sure to stop by to say hello and pick up a copy of her latest CD called, I Hope You Have a Wonderful Life. I’m glad I went, and am looking forward to seeing what she and her talented team come up with next!

Cool story, thanks for sharing that

Thank you for sharing, @xmark For anyone that is interested Gina has a banjo instructional DVD/ Streaming Video available from The Murphy Method website. Giving an insight to her style of playing banjo.