Picking up where the pick-up discussion picked up, my guitar now has a good pick-up, and runs into a good direct box. Then what? I know you could go into the sound board from there but until I get that regular gig at the Ryman, what kind of amp would you recommend to finish out the gear list? (I know, the gear list is never finished.

) What do guitar pickers use to pump out a good clean sound for small venues like a club or a church?

As always, y’all are so helpful. I very much appreciate the expertise.

There are so many ways you can go with this. If it’s just your guitar, an amp with a warm, clean channel would be fine. If it has a line out, you could then use it as a monitor down the road if you decide to run in to a board.

Another option is to buy a powered speaker, especially if your DI box has a preamp in it. If you expand in the future, buy more powered speakers just like it and continue building out your sound system. When I was last gigging, I’d use 2 powered speakers (one for the main and one for a monitor) and a little 4 channel mixer.

Then there are also several all-in-one PA systems to choose from. Search amazon.com to check them out.

I use a loudbox mini. I like the basic sound of it. In smaller settings it is all I need (or want). It is very easily portable. I went to get one of the bigger loudboxes for more features, but oddly enough, I didn’t like their basic sound as well. Mark’s idea for starting a sound system piece-by-piece is interesting. Which ones do you like Mark? I do like the line array systems like the SA220/330s and bose systems. They are more capable for coverage and full range sound than my mini, but they are not near so easy to transport. It is a whole different animal (and the Bose and SA’s seem to target totally different strengths). If I were trying to cover a place with 100+ folks, I would probably be looking at one of those systems (of course when things get larger, we typically have a PA, so I have a hard time justifying a bigger setup).

All that said, your ears are different than mine. I suggest that you go play a bunch of systems with your equipment. While you are trying them out, don’t be bashful… crank it up a little as well as playing softer. If you sing, see how your voice sounds on it. Hopefully the right system will jump out to you as it did for me.

Just had a thought… one of guys on here (Doctor Guitar) made some line arrays that sounded like they were phenomenal. I might hit him up for some DIY guidance if you are so inclined.

I went with the QSC K12 series. They’re relatively light weight and pack 1,000 watts of power each. I also like the bass boost in times when a bass guitarist or digital drummer wants to plug in. I was impressed by all of the settings available right in the speaker.

I also have a couple ElectroVoice ZLX 12P speakers that are about the same size. They’re a little lighter and cheaper, but I don’t like the sound quality quite as much as the QSCs.

I went with the QSC K12 series.

I just pulled those up… they look pretty incredible.

They really are. The sound they produce is impressive. If you wait long enough, you can catch them on sale, or sign up for Guitar Center’s email and wait for a coupon.

About 10 years ago, I purchased a Carvin AG100D acoustic guitar amp. This little amp provided 3 separate channels/inputs, one with an XLR (with phantom power) and each channel with active equalization. The amp put out 100watts RMS, although it was a quiet 100 watts ( sounds more like a very clean 50 watts). It also offered reverb, phasing, chorus, delay and flanging individually controllable on each channel. And finally, a 5 band graphic eq on the master output. It is built with a beefy 12inch full range speaker and a volume controllable piezo horn tweeter. These were built to be bulletproof with the exception of a simple band connector in the amp section that would occasionally get loose or need cleaning. After a few years, mine developed a weird (yet common) drop out that was easily by opening up the amp and cleaning the connection. The problem never returned. Did I mention that the amp includes a speaker stand connector?

It is a great sounding amp for acoustic guitar, voice, mandolin, and even bass. Unfortunately Carvin audio split from Carvin in 2015 and finally stopped building these wonderful little amps.

You can still pick these up for well under $200.

I know this response is a few months late but for anyone looking for a decent amp for small venues and garage get-togethers, I’ve owned a Bugera AC60 for about a year now and absolutely love it. It has two independent channels, one low and one high impedance. The sound is fantastic and it can get plenty loud if needed. Great little amp for the price.

FWIW. I checked out the QSC K series in store. Awesome. To my ear, I liked the K10s and K12s about equally (the 8s were much different to my ear in both the lows and midrange). Since the 10s are lighter and cheaper than the 12a, I am leaning to those. A pair of those an a sub and it would be an awesome setup for most places. I don’t even need anything like that, but I am still thinking about it.

I own a couple of K12s. They’re great speakers. I went with them over the K10s because of their wider coverage angle. I don’t think I’ll ever play a venue that requires more power.

This little rig always worked well for me (I’ve since updated the powered mixer to 12 channels with 4 x 400rms watts built-in power amps). I biamp the small lines with frequencies above 100hz and the sub get the frequencies below 100hz (makes for very clean signal). When the gig is outside and we need to cover over 200+ people, I add the larger lines I built more recently (they get crazy loud and throw over a 1/4 mile distance clearly). Fun stuff! 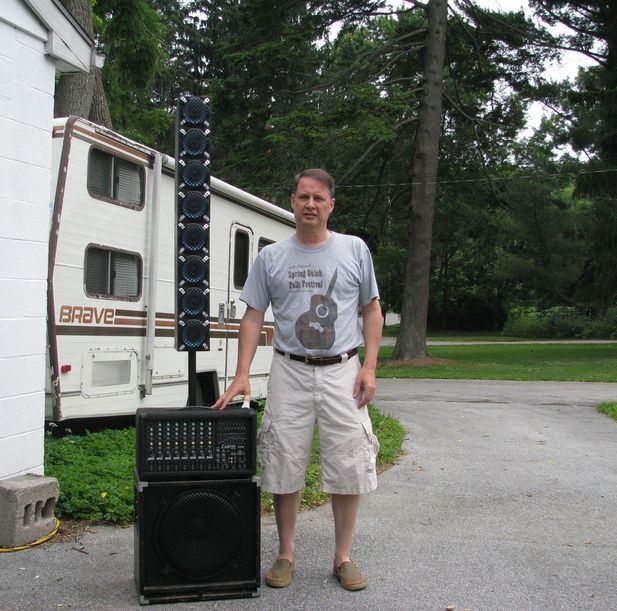 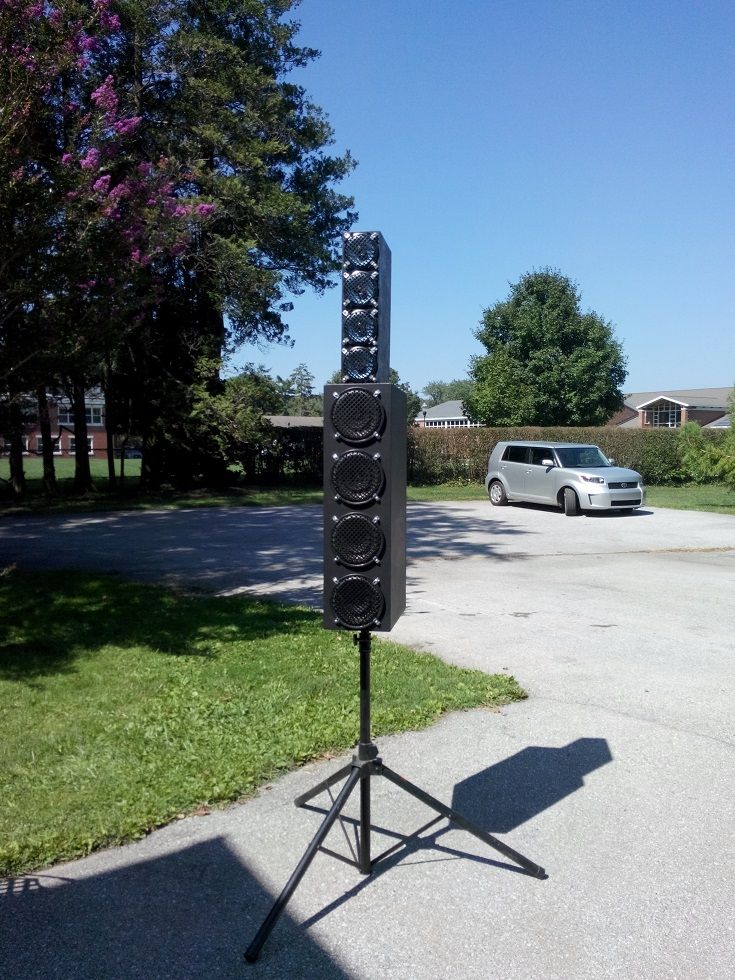 You can’t see it in the pics, but the small lines use coaxial drivers with dome tweeters while the large lines use full range drivers with whizzer cones. The big boys sound pretty good by themselves, but the addition of the small drivers really brings them alive.

Picking up where the pick-up discussion picked up, my guitar now has a good pick-up, and runs into a good direct box.

When I read that quote, I just couldn’t resist - sorry!