Are there any twangers in the Kansas City area? Thinking about buying one, but would like to play one first.

No, there aren’t, except that the shop is 3.5 hours from KC, ha. We’re the only ones with Twangers at least till next year. Remember that we do offer a return policy.

With the return policy, I don’t think you can go wrong. When I first got mine, I was a little worried because it sounded muted compared to the prototype I played at camp. Then I put some light strings on it and it came alive!

Seriously, you will NOT be disappointed. I love everything about my Twanger. I just wish I had more time to enjoy it.

Let me know when you spot it! Thank you so much, @MissMaggie! 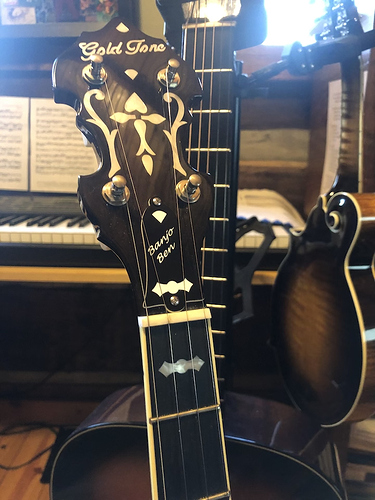 I like that truss rod cover! Did @MissMaggie find that for you?

Well, like I said, I couldn’t use it, so I really hoped you could

And what are the odds I’d find one with his name on it? It’s freaky I tell ya.

And by the by, I made 20 more with no name, just the two designs at top and bottom. I’ll bring them to camp for anyone with a Twanger (these are cut specifically for Twangers).

Then you can take it to your local engraver guy, probably at the mall, and have him add whatever name in whatever font you want.

So did you make those yourself or have them made?

I had them made by a local guy who owns an awards store, you know, trophies, plaques, and such. I gave him the cover that came on the Twanger so he could cut the pattern and get the holes in the right place. I also gave him pictures of the head stock and some of the fret board inlays and asked him to come up patterns to put on the new cover. The first one was not cheap, but once he had the pattern and designs, extras were relatively inexpensive, so I got 20 more with no names.

I expect to have some left over after camp; I’d be happy to send them out to other Twanger owners then.

Oh ok cool! I saw you had one made a while back for your H&F RK, was that the same guy?

Yes it was, and he made one for my Gibson too. The little flourishes are different on each one.

If anyone needs it, I just made a Photoshop file with the exact dimensions of Maggie’s truss rod cover so I could give it to the guy doing the engraving. Plus, it helps to get a visual of what the finished product will look like with the font you select.

Shoot me a PM with your email and I’ll email you the original Photoshop file.

And just to reiterate, I have 20 of these (can have more made if needed). I’ll bring to them to both camps for anyone with a Twanger. They just don’t have any text so you can put whatever you want on them.

You can see Ben’s above and here’s mine. 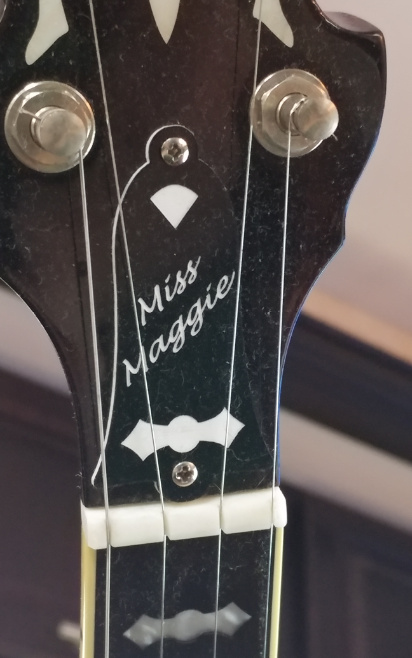 Perfect name for a Banjo. " Miss Maggie". There’s something poetic about that…

Well, it’s not “Little Maggie”, but I like it

Just saw it in your sharin’ lick video, looks great.