OK, so I was watching Marteka pick Sally Goodwin again and I noticed something-

I love watching her fingers as they precisely pick down at the strings rather than across them. Then I noticed the ring finger of her right hand is super-glued to the banjo head.

My ring finger tends to drift or lift off the head, so here’s my question -

Is a firmly planted ring finger on the right hand a desirable, but not necessary, technique or is it a fundamental requirement to getting better on the banjo?

Can’t wait to see the answer from the seasoned players… as this topic comes up from time to time.

I have heard strong players on both sides of the camp say - generally speaking… that preferences exist to there is not a definitive absolute on this.

I have dabbled in anchoring… But it tends to not stay for long… as it doesn’t come naturally to me.

But I am just a beginner… And curious about this too… so I am definitely not qualified to answer. I just shared my experience to assure you… you aren’t alone.

What I have noticed is that those who anchor don’t seem to ever “second-guess” anchoring their ring in favor of releasing.

Conversely, I think it is much more common for those who don’t anchor the ring finger… to question… especially when it comes to pick accuracy. In other words, the wondering to anchor seems mostly one-sided

Hope that others share for you… and if you are thinking of switching, you were wise to ask now because, as you know, changing is tough later @banjoe.

Good luck with your decision - one way or the other and try to let us know… months from now, which way you settled and what was the result.

I’m not surprised it comes up from time to time. It’s such a beginner’s question.
But I may have the answer. Here is Earl’s hand. 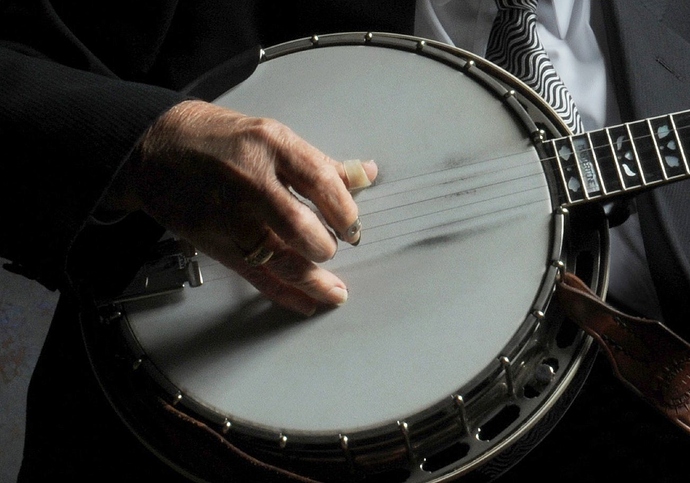 Keep it planted. When you get really, really good, then you can be a bit more relaxed.

Hi Joseph, This is a topic that crops up pretty much every week on the BHO and in every teachers mail box ever since Earl was asked that same question on the interview below. Unfortunately the part where he discusses this has been omitted from this clip.

I have studied thousands of hours of video’s of banjo players and what I have witnessed / concluded is that very few actually anchor two fingers on the head. Having said that most teachers will tell you that is your goal.

I try to keep both fingers down but I tend to flip between my pinkie and ring. I seem to recall @BanjoBen saying he had problems anchoring both fingers. From the footage of Earl playing I have watched closely I am convinced he didn’t always have two fingers on the head at all times.

Marteka is an exceptional banjo player and I keep hoping Ben will invite her and her brother to the cabin as guests.

And Dave Hum who it seems never plants is fingers on the head although his banjo head tells a different story.

Willow Osborne who anchors her pinkie on the edge of her bridge.

So, in answer to your question, I do believe it’s desirable to have the ring finger planted but studies have shown me that it is not necessary. I would add I am no expert. Like you Joseph I am a student what I know is what I have learned studying others and that includes slowing down Marteka’s videos.

We are all built the same but we are also physically slightly different, some have long and slender fingers others short and fat. I would encourage everyone to take time out to study Earl, Sonny Osborne, JD Crowe and the many, many other great players out there. But don’t force your wrist at a weird angle like JD in the hope that it will make you a better player, Don’t try to pry your front teeth apart to look like Earl. Just be yourself and apply that to your style.

P.S. Anchoring your fingers doesn’t come easy. You have to work at it.

I’m sure we’ve had this discussion on the board here at least once. The bottom line from it was, it’s just preference. I only anchor my pinky, and I’m pretty sure Ben does the same. Several others felt out of control with their ring finger flying around.

Picking the strings square rather than across is more about the overall position of your hand than about the anchoring. If you’re picking across, try giving your wrist a little more bend and then pull your thumb in closer to your palm.

I’m guilty of letting my thumb drift too far away from my palm, which results in a tone that’s less bright than my fingers are picking. Katy actually covered that very issue at last year’s camp.

I believe Ben talks about this in one of his beginner lessons, Banjo Hand Positions I think. I personally anchor both. I used to only anchor the pinky but as I increased in speed my pick hand just felt too loose.