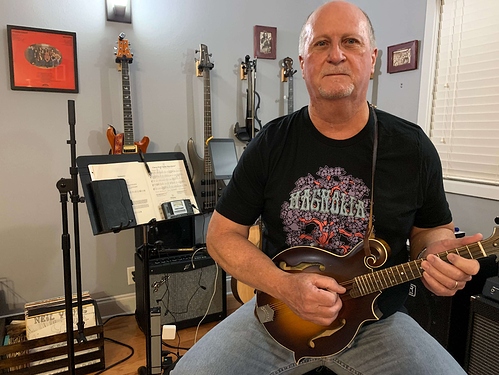 What was it that first got you interested in playing the guitar, mandolin or banjo?
I started playing the guitar when I was about 13 because, like most boys that age in the early 70’s, I wanted to be a rock star, and later, bass so I could be in a band. I only took up the banjo and mandolin about 2 years ago because I always loved the sound of those instruments, and I liked people like Earl Scruggs and Bill Monroe since I was a kid, so I finally decided to try my hand at playing it. I wish I had started a lot sooner. Being born in Kentucky and raised in rural West Tennessee, and coming of age in the late 60’s, early 70’s, I was exposed to country/bluegrass through the Grand Ole Opry, Hee Haw, and the music my parents and grand parents listened to on the radio. I really always liked Bluegrass, and bluegrass instruments, but I only started getting really interested after hearing The New Grass Revival in Michigan in the early 80’s; after that I started listening to the people they said influenced them. Watching Austin City Limits and people like Bela Fleck, Nickel Creek, and of course, the movie O’ Brother Where Art Thou, also contributed to my love of the guitar, mandolin and banjo and bluegrass in general.

How long have you been playing and what’s your motivation to play?
I’ve been playing guitar and bass since about 1973, violin since my early 30’s, and as I mentioned before, the mandolin and banjo for about two years. I’ve just always loved music and I believe that even though one may not be very good, it’s good for the soul to be able to pick out a simple song.

What’s your favorite lesson on Ben’s site and how has it helped you improve?
There are quite a few I could mention, like the forward roll lesson for banjo, but the one that has helped me the most is the mandolin picking technique lesson Ben did with Nick Dumas; my right hand picking, for both mandolin and guitar, has improved a lot since then; problem is, now my left hand can’t keep up with my right.

What’s your goal when playing?
Music is such a beautiful art form, that I just love being able to play, even at a modest level. My goal is always to play in tune, in time, and be expressive.

Are there any other instruments or genres of music that you enjoy playing?
I really enjoy all forms of music, from rock to classical, blues, and Motown.

How long have you been a Gold Pick member?
It would be about a year and a half now. Best investment (music wise) I’ve ever made.

Do you have a favorite technique? What is it?
I think I would have to say three finger Scruggs style; I find it has helped my fingerstyle guitar playing a lot.

If you could play in anyone’s band, who would it be and why?
It depends on what day you ask me. I just watched a video Russ Carson made about being on the road with Ricky Skaggs, so I guess today, I would have to say Kentucky Thunder. It was so unbelievable that people like Russ Carson and Cody Kilby just come strolling in at the camps. Wow! Those guys are the thinnest, of the upper crust of musicians!

What type of gear or accessories have you found that work best for you?
That would be my Fishman Loudbox mini amp, L. R. Baggs Venue DI, and my Ampeg PT-50T bass amp. I also love my Taylor guitar, Northfield Mandolin, and my Skarstad Moroz violin.

If money was no object, what would be your dream instrument(s)?
That would be the Fender Stratocaster Jimi Hendrix burned at the Monterey Pop Festival in 1967.

If you didn’t have to sleep, what would you do with the extra time?
I guess I would practice so I could get good enough to play with Kentucky Thunder.

Anything else you’d like to add?
I have really enjoyed learning from the website, Ben is such a great teacher and has so much material, you could literally go as far as you wanted to with the lessons on there. But what I really enjoy more than anything else is the Cabin Camps, which is why I’ve been 3 times in little over a year. Ben has created a real sense of community with these camps, and every time I go I feel more a part of it. Playing in a band with other campers is both a learning experience, and a lot of fun.

Thanks for letting us feature you Steve!

Steve on being selected as this weeks Gold Pick Member

Congratulations Steve–fellow Melting Pot Squirrel Stew member. I really enjoyed reading your bio and meeting you at the October camp.

Like @blkelk31051 said, it was great to meet you (and pick w you in the mandolin circle!) at the October '20 Camp! Cool Bio as well

Nice to get to know you Steve. We have similar taste in amps, I also have and love a fishman mini and an ampeg bass combo.

We have similar taste in amps, I also have and love a fishman mini and an ampeg bass combo.

Ampeg amps are more noticed for their Bass amps, but their older guitar amps are just incredible! I have a 1965 GS12-R Reverberocket 2 that’s as good if not better than any Fender I’ve ever owned or played through. That’s saying a lot because Fenders are killer amps! The best thing is, you can get a sixties Ampeg for about a third of a vintage Fender! Anyone who plays electric and wants a superb clean tone should check them out!

Steve, congrats on being the gpotw! Thanks for sharing, and I sure enjoyed reading your comments.