I’m working on Earl’s version of Shuckin’ the Corn. The tablature for the first section is provided on page 132 of Earl’s book. He describes the tab as the opening break for the “Essential Earl Scruggs” recording. I can follow along (not play at Earl’s breakneck speed) through the break. But then there are at least two more breaks by Earl and I’m a little mystified as to how to try to figure it out. The tab shows section breaks in the song but they really have little to do with the later breaks. What is the significance of the section breaks? Each section is 12 measures long. I suspect it is simply a means to provide the chords and the lengths of the following breaks, which seem to be shorter than the opening break. Any advice?

I have Earl’s old book with “Shuckin’ The Corn” on pages 119-121. Since I haven’t a clue what you are talking about, I thought maybe this older version might offer a clue.
I see at the end it says “48 Bars Fiddle Chorus.” I guess you can fiddle around with your banjo then! 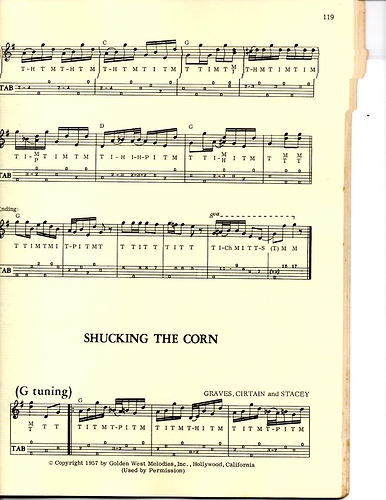 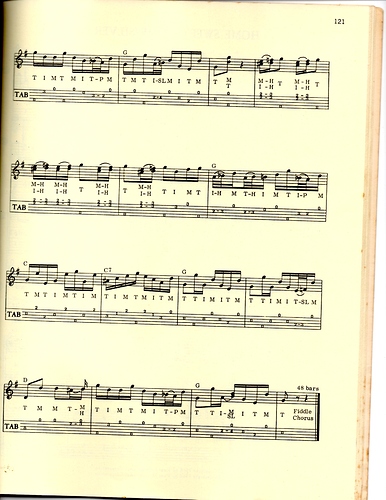 Thanks for posting that info. It made me remember that I also own the old book. I searched around and couldn’t find it immediately. It is here somewhere, I’ll have to search the house. There are some minor differences between the versions. I have heard that some tab mistakes were corrected in the later version, but I don’t know if this represents a mistake or a different approach.

One thing I note is that at the end of measure 12, the old version shows a repeat back to the beginning. (Thick vertical line with two dots.) The new version doesn’t show that but does include a double vertical line which is supposed to represent a section break. In the Essential Earl Scruggs version, Earl plays the opening break for a full 36 measures, also at the end of the new version it shows “24” over the last measure. It seems to me that the following breaks are shorter and likely represent 24 measures, but I haven’t timed it yet. Anyway, for now I think I’ll try to get the tab I have memorized, get comfortable playing it, then come back to it and see if I can get the later breaks figured out.

All can do is refer you to page 31 of Earl’s old book, where he writes, “I am sure a lot of your ideas will be better than mine throughout this book. As a matter of fact, when I make a suggestion, I would like you to try it out; at the same time, take it merely as a suggestion and try your own ideas as you go along.”
Sounds to me you are doing it in a manner that Earl would approve!
He just keeps telling me to “Do these exercises over and over and over until after a while, you will be doing them while thinking about something else.” (page 25)

Hey @BanJoe what book is that?
Is it Earl Scruggs and the 5 string banjo?
I love how th e songs are also transcribed in standard notation, I must have it
Can you send me a photo of the cover? Where can I find it? 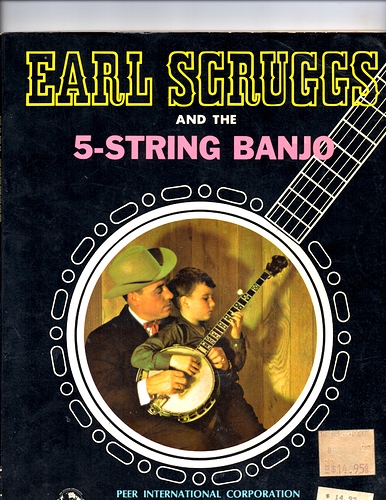 That’s his son, Stevie Scruggs, with Earl on the cover.

Everybody stop looking! I found the tab for the following two breaks at the Banjo Hangout.

Great! Now I can get back to looking for Waldo.