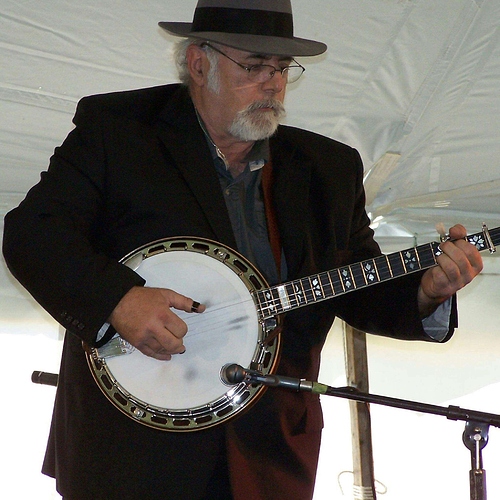 FB_IMG_1555435565356 2.jpg2048×2048 249 KB
What was it that first got you interested in playing the guitar, mandolin or banjo?
I grew up listening to bluegrass music. My father loved bluegrass music and would play records on the old RCA suitcase record player. I was very intrigued with the banjo and how they played so many notes. The first time i saw Earl Scruggs on the Beverly Hillbillies show I was blown away. I grew up in the fifties and sixties so I also liked a lot of the music that was popular during that time also.

How long have you been playing and what’s your motivation to play?
I started playing guitar when I was fourteen but didn’t start playing banjo until I was twenty three. It just kind of became an obsession. I loved the sound, so in 1976 I decided to build a house and learn to play the banjo at the same time…lol. I did manage to get the house built.

What’s your favorite lesson on Ben’s site and how has it helped you improve?
I can’t say that I have a favorite. I like to look at them all and pick out bits and pieces that I like. I have been told that I have kind of my own distinct style. When I started learning I went about half way through a book and then just set off on my own. I started playing in a band within the first year .

What’s your goal when playing?
If a note is worth playing then its worth playing clean. I like to tell people starting out don’t worry about speed, that will come, learn to play clean with good timing. Timing is everything! When I’m playing with the Atkinson Family I ask myself what can I do to make the person singing lead or playing a cut sound better. Sometimes the answer is nothing. Learning when to not play and learning not to walk on whoever is being featured at the moment is very important. It seems some players never learn this.

Are there any other instruments or genres of music that you enjoy playing?
I play guitar and electric guitar and I used to play mandolin some. I like playing older country and some country rock. I don’t care much for the stuff that’s called country music now days but that’s a whole other discussion lol.

Do you have a favorite technique? What is it?
On banjo I use three fingers in mostly Scruggs style but I like to season things with a little melodic and chromatic notes here and there.

If you could play in anyone’s band, who would it be and why?
Holy cow that’s a tough one. There are so many good bands out there. I like the sound of the Stanley Brothers Flat and Scruggs. I wore out a fret trying to play pull offs as clean as JD Crowe. I listened to a lot of JD Crowe.

What type of gear or accessories have you found that work best for you?
I have three banjos. A 1985 Granada, a Dearing Saratoga star, the fiftieth one they made it has the tone ring from Sweden but my current favorite that i play most of the time is my 27 Gibson with the no-hole archtop tone ring. I use BMF capo and I like the Blue Chip thumping, a little pricey but well worth the money in my opinion.

If money was no object, what would be your dream instrument(s)?
Gibson prewar banjos

If you didn’t have to sleep, what would you do with the extra time?
I write some of the songs we do and I also have a very nice home recording studio.

I decided to build a house and learn to play the banjo at the same time…lol. I did manage to get the house built.

Classic Quote of the day!

Enjoyed the profile! Thanks for the sprinklings of Pearls of Wisdom throughout!

Wow that is a good saying to go by!
Congratulations on being Goldpick Member of the week.

Congrats on being Gold Picker of the week Richard!

Congrats Richard on being selected as this weeks Gold Pick Member

Congrats Richard on being the gpotw! Fun to read your answers and glad to learn a little about your musical journey.

Great advice to just enjoy and have fun with your playing. I enjoyed your biography, congrats!

Hi Christian, Good to see you back on the Forum.

Congrats and welcome Richard! Lots of wisdom in your responses, I hope to see you around the forum!

Richard, You and me have a lot in common and I salute you. I am unable to practice like I want to and should, but I’m kind of hanging in there the best I can. Your history is very much like mine, musically speaking. I am about the same age as you, maybe a little older, but music has driven my life and continues to still. I just wanted you to know that I am a supporter of folks like you and I wish you much success in your musical career.
Lee Smikrud

Thank you for posting and sharing. Now that you’ve broken the ice, I hope to see you stop in more frequently here on the Forum!

Thank you everyone for looking at my interview and for all the kind words.

Thanks for posting @ratkins4. Hope to see you post often!

I normally do not check out the Gold Picker of the Week. I’m too intimidated. It’s like going to church and being told how wonderful the saints are, while in your heart you know you are a sinner.
So it was a huge surprise to discover that this particular Gold Picker is someone I have seen in concert on many occasions, and one in particular that involves the world’s largest cheesecake.
And he lives about 21 miles down the road from me!
Congratulations, neighbor!

Thank you for the kind words. As far as practice I like to tell people to have their instrument where is handy to grab at any given moment. I leave mind in a stand except during dry season in the winter. That way I can pick it up several times a day even if its only for just a few minutes. I think playing several times a day even for a short amount of time is better than trying to have one long practice session.

I think playing several times a day even for a short amount of time is better than trying to have one long practice session.

I’m glad t hear that, because that’s what I’ve been doing.

Al Worthen told me you’ve been tinkering & making some pretty good bridges.
Any chance I can get my hands on one? I’d love to give you some product feedback. I bought my Sierra from Al. It has the standard 5/8 Deering bridge (not the Smile.)

Yes I have quite a few depending on what height you want. Al may have some in stock also .