I bought the Kershner tailpiece from the store and installed it today. Boy, was that a learning lesson. First, banjo parts makers don’t believe in documentation of any kind. This drives me bananas. So, I guessed at how to install it. There are (were) two screws that I removed because they didn’t seem to do anything. Searching the internet I found they’re there for another kind of banjo, not the modern Fender style. So, in an effort to keep loose items off of my banjo, I put them in a drawer. If they serve a purpose, please tell me.

Second lesson: you need more than one loop to hold strings. I thought I had enough around the pegs… nope. Three out of five strings were slipping. Two popped off. No extra pack of strings, so I had to run to Gutter Center. Now, I probably have too much around the peg head, but they ain’t slipping or coming off.

Ordered 5 packs of strings from the store. Lesson learned.

The tailpiece itself looks so much nicer than the stock Ibanez tailpiece, and it seems to sound better. There was a slight buzz, or tinniness with the old tailpiece that is now gone. So that’s nice. And it doesn’t have a flipper thing that makes noise either! (tailpiece cover I meant - what’s the point of those things anyhow? keep stray shurikens from cutting the strings?)

Not much else to report. Here’s what it looks like. If I installed it incorrectly, please let me know. 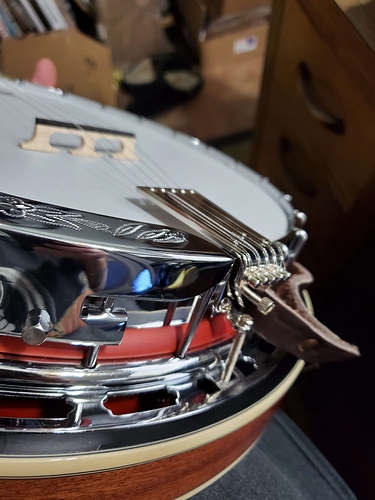 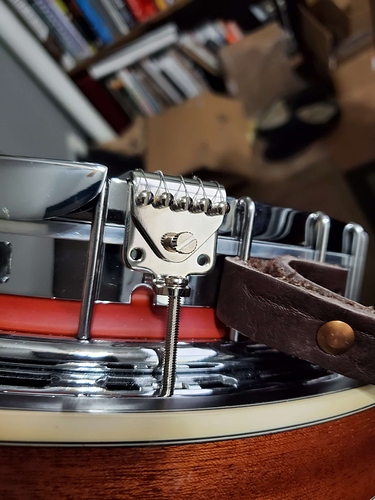 Did you happen to watch the tutorial on Banjo Maintenance( Particularly the How to install your string’s??? it’s a must to avoid that string at peg situation your having) Just a thought, check it out.

Apparently us beginners are lousy string winders. I NEVER know how much slack to hold back when I’m putting on new strings. Like everything else, I’m sure “practice makes perfect,” but I think I’ve watched 23 videos on “How to change strings,” and I still don’t know how much slack to hold back.
Some days I get only one clean wrap, other days I get too many overlaps.
As long as it doesn’t slip, I figure I’m good to go and “don’t sweat the details.”

I don’t know if it makes any difference, but I run my strap between the rim and the tailpiece so that the strap does not put extra pressure on the tailpiece.

Here is what I do when changing strings.

I place my hand like a karate chop half way between the tuners and tail piece. I route the string over my hand and this gives me enough slack to get about three wraps on the tuner.

Three wraps is ideal, IMHO.
Thanks for the tip!

Replacing the tailpiece helped me understand “overtones” as well. Like I said previously, I’m not hearing whatever sound it was that I didn’t like. The notes sound less jagged, and a little cleaner. Best way I can describe them. I was afraid to give too much credit to it yesterday, since I’m sure a lot of the janky-ness I hear is due to my playing, but today it was still cleaner. I’m not playing that much cleaner since just yesterday, so I guess it is the tailpiece and a taming of those unpleasant overtones.

There is still a sympathetic harmonic (not sure that’s the correct terminology, but you get the idea I hope) that I hear when playing. It’s pleasantly inline with the notes. Not sure if it’s the head vibrating or something else, but I am able to hear the good overtones, and thankful to have found the source of the annoying ones.

I run my strap between the rim and the tailpiece

I have the strap attached this way because it was how Ben showed it in one of the early videos. The banjo will stay upright, and not fall forward, so I didn’t feel any need to try any other arrangement. Also, with the size of my gut, the strap usually runs off the bottom just under the tailpiece screw. In other words, it’s not often in contact with the tailpiece. If I were skinnier… it probably would be.

You need more than one loop to hold strings. I thought I had enough around the pegs… nope. Three out of five strings were slipping. Two popped off.

Hmm, that’s interesting… I use only one loop and one or two wraps, and I never have problems with the strings slipping.

tailpiece cover I meant - what’s the point of those things anyhow?

I assume they are probably for aesthetic purposes, but that’s just my guess.

I still don’t know how much slack to hold back.
Some days I get only one clean wrap, other days I get too many overlaps.

One tip I learned, I think from Ben or Jake, is to pull the string taught, then take the amount of slack it takes to reach the next tuning peg.

There is still a sympathetic harmonic (not sure that’s the correct terminology, but you get the idea I hope) that I hear when playing. It’s pleasantly inline with the notes.

Yep, that’s totally normal. You’ll hear that on most any banjo- actually, probably any stringed instrument with the exception of electrics not plugged in- and it’s a good thing; it helps with the effect of more resonance. I love it.

How many wraps do you want??

So, pull your string through the holes so no slack. For 3 wraps, pull back roughly 2 1/4 inches of the string, and start twisting it up.