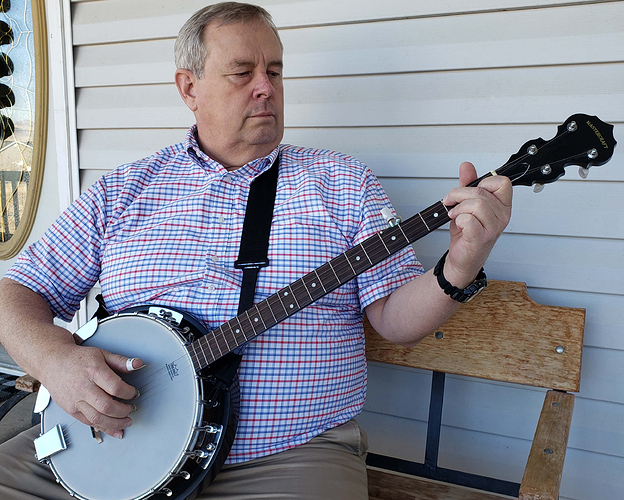 What was it that first got you interested in playing the guitar, mandolin or banjo?
I was raised on bluegrass and Marty Robbins. January of 2012 I watched a video of Earl Scruggs picking Foggy Mountain. I wanted to learn how that was done. I watched Scruggs videos over and over. There aren’t many music stores out here in the boonies so, I put a little money together and ordered a banjo. It arrived March 28, 2012. That night I learned of Scruggs’ passing.

How long have you been playing and what’s your motivation to play?
I’ve been trying to play since 2012, but I’m still a base beginner. I’m 58 years old and life has taken a toll on my hands, specifically the tendons in my right thumb so it’s slow going. I have to quit for months at a time to let that Repetitive Stress Injury heal. My motivation is simply learning something new. I love to conquer a new mental barrier. Plus, I love bluegrass. It reminds me of my Dad.

What’s your favorite lesson on Ben’s site and how has it helped you improve?
The most beneficial for me were the lessons on theory. My mother had a goal for me to play the piano 50 years ago and I went through the motions but I didn’t understand the what and why until those theory lessons. Understanding that foundation has made it easier to build and grow. But, my favorite is the forward roll drill with Boil Them Cabbage down. I’ve got it up to full speed, actually have to hold back a little and can play it with the band mp3. That has been a blast!

What’s your goal when playing?
Today my playing goal is clean, clear notes. Other times it has been speed or precise counting of notes. It changes. I set micro goals. I’ll never have a macro goal like playing in a band. I do this for me.

Are there any other instruments or genres of music that you enjoy playing?
Not really. My mother had me take piano. I tried the guitar for a few years. I even play the French Horn from school band in my youth but I’m only working on banjo now.

Do you have a favorite technique? What is it?
Technique? Um, I try not to get my fingers caught in the strings. I’m too much the beginner to have technique or style. But I’m learnings to pick. I might try clawhammer someday, but I kinda doubt it.

If you could play in anyone’s band, who would it be and why?
Steve Martin but, only if I could play the light switch. Anything else would simply be an embarrassment to everybody involved. After Scruggs, I enjoy Martin’s music the most.

What type of gear or accessories have you found that work best for you?
The most important thing for me is to leave my banjo out so it’s in the way. If I put it away, I forget about it. I have a cheap simple banjo, it doesn’t have the best sound, I play with dunlop picks and nylon neck strap that came with it and it works great for me. I think I’m into the whole thing including gig bag, tuner and an extra set of strings that are still in the paper, about $400. You don’t need to break the bank to have a good time.

If money was no object, what would be your dream instrument(s)?
Frankly at this point I would just look silly with an expensive banjo, but my dream would be to one day have the skills that would warrant an easy to finger banjo with a crisp, clean tone whether it is $60 or $6,000.

If you didn’t have to sleep, what would you do with the extra time?
Well, it wouldn’t be practice the banjo. My wife gets all of that she can stand during waking hours. Maybe take up woodworking. People who can make mandos, guitars or fiddles have always impressed me.

Anything else you’d like to add?
Becoming a Gold Pick picker was one of the best things I did. I’ve tried other methods and to memorize a watered down song, they worked well but when it came time to learn a song that wasn’t in the lessons or progress without learning tabs or theory, I was stuck. So, I went back to square 1, started over from the beginning and I’m glad I did.

Thanks for letting us feature you Mark!

Hey you are up near Dinosaur National Monument. I spent some time there tripping over old bones. That is a nice part of the country. Keep picking!

Mark, congrats on being the gpotw and thanks for sharing a little bit of your story. I like your philosophy on keeping the banjo out where you have to trip over it to get around the room…out of sight, out of mind!

You don’t need to break the bank to have a good time.

Agree with the above point in your answers…although it is fun to window shop and kick the tires if the opportunity ever presents itself!

It was interesting reading your responses and wishing you all the best in your banjo pursuits!

Great to read Mark. You make me feel good about my own progress too - It’s slow, but pleasing to me. I can see my own progress and that’s the main thing. Crazy to note - I too measure it (at present) with the Boil Them Cabbage Down exercise too. I’m not yet playing with MP3 as I find that hard to hear. Enjoy the journey!!!

Welcome Mark!! Hope to see you around the forum!

Thanks everybody. It’s great to get the support.

Mark on being selected as this weeks Gold Pick Member

Ya, that’s the place. If you were at Dinosaur the summer of '80, I was a seasonal ranger. Just out of high school and clueless.