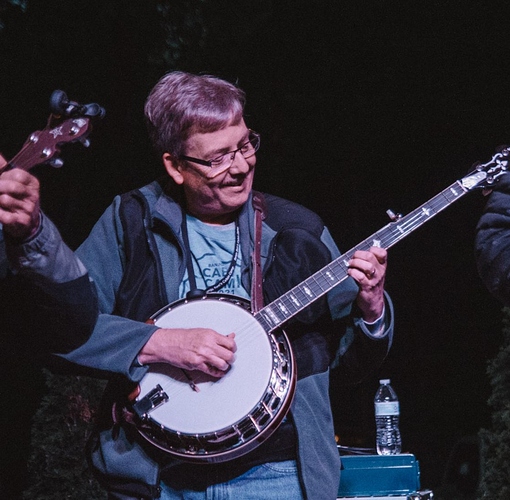 What was it that first got you interested in playing the guitar, mandolin or banjo?
Wish there was a really unique story to tell here, but there’s not. Like many others, I was captivated by the sound of the banjo on TV after hearing Flatt & Scruggs on the Beverly Hillbillies. I also loved hearing Roy Clark (and others) play banjo on Hee-Haw as a child. My mother was very supportive of my interest in music, and she even took me to the local music store to seek out a banjo and a banjo teacher! (Thank you so much, Mom!) Unfortunately, our home town had neither. The salesman was also the beginning guitar instructor there and sold us a classical guitar and some lessons. I was more interested in picking out finger patterns than strumming chords and eventually lost interest.

How long have you been playing and what’s your motivation to play?
Three years now on banjo, and it’s somewhat therapeutic for me. It allows me to use another part of my brain and try to make the world of music just a little bit smaller. I’m also a long-time wannabe hobby songwriter.

What’s your favorite lesson on Ben’s site and how has it helped you improve?
This is a difficult question to answer because there have been so many, but some favorites have to be the “Just as I am” build-a-break, Teardrop back-up, Fretboard Geography with Alan Munde, and Blackberry Blossom back-up. Each of these has helped demystify the banjo just a little bit more. Since I’m a latecomer to the bluegrass genre, many of the melodies were not very familiar to me, but I’m getting more and more exposure as time goes by.

What’s your goal when playing?
A. Have fun
B. Not lose any ground
C. Learn something new

Are there any other instruments or genres of music that you enjoy playing?
I’ve played trombone on and off since 7th grade (currently off for a few years) and flirted with some others. I dearly love playing and listening to the big-band music of the 40’s, swing, and jazz. Also played trombone at one time with a Latino dance band and had a blast! I would like to eventually take up the mandolin and guitar (one of them geetars like Roy Clark or Buck Owens played…one with ALL steel strings!)

How long have you been a Gold Pick member?
Three years. Decided to become a Lifetime member after a little over a year into it (a great gift idea from my wife).

Do you have a favorite technique? What is it?
This will likely be a moving target. Right now, three-finger banjo is my primary focus…but that may shift around some over time. I like the claw-hammer sound on banjo, and flat-picking the guitar would be fun to try too!

If you could play in anyone’s band, who would it be and why?
Being on the road for extended periods of time is not as attractive to me as it was 30 years ago, but there are many who I would love to be around and learn from…like Bela Fleck, or Allison Kraus & Union Station, or Ricky Skaggs and Kentucky Thunder, or The Kruger Brothers, or well…the list goes on and on!

What type of gear or accessories have you found that work best for you?
I really feel like a newb and not very qualified to recommend much, but so far after trying several picks, I’ve currently settled on the JD Crow model Blue Chip thumbpick and Sammy Shelor fingerpicks. The Strum Hollow fifth string capo worked well for me on my first banjo since it did not have railroad spikes. Tried Gorilla Snot on a whim and absolutely love it for keeping my finger picks in place. There’s still so much more to try out there and so little time…

If money was no object, what would be your dream instrument(s)?
I still don’t feel like I know enough yet to be qualified to even form much of an opinion. If an instrument was too monetarily valuable, it might be more of a burden than a joy for me to play. I did however set for myself a first-pass attempt at it for banjo and I referred to it as my “Banjo Pilgrimage” at the time. I ended up with the Twanger from The Banjo Ben General Store, and I’m still quite pleased with this instrument. There’s a little review on the Twanger at the General Store that outlines how I arrived at my choice. Of course there are plenty more shiny objects out there still catching my eye though…

If you didn’t have to sleep, what would you do with the extra time?
Set up a home studio and learn how to use it…and figure out how to play and sing all of these sounds and words bouncing around in my head! Or, I could set up a small shop and design and build some of those little gadgets that come to mind whenever I find myself wishing there was a better way to do such-and-such. Or, I could catch up a little on reading some of those books I bought. Or, I could just sit around watching old reruns on TV and looking at social media. However, if I were a wiser man, I’d ask the Lord what to do with it.

Anything else you’d like to add?
I’ve really enjoyed going to the cabin camps each year, and this year was so fortunate to be able to attend the all-banjo camp. I always learn so much, and was honored to be able to talk with and learn from Alan Munde this year. Getting to spend a little time with all the folks at the cabin camps has proven to be an important part of the learning and growing process for me. The online forum is also a great way to learn and stay connected.

Thanks for letting us feature you @xmark!

Hey Man!! Congrats on Be the Gold Picker of the Week!
I like your goal of playing. Good balanced mindset.

Howdy! Good to get to know you!

A. Have fun
B. Not lose any ground
C. Learn something new

Well, you’re handily beating me at points B and C right now…

Good reminder that I need to play more!

Thank You for sharing. It was great to meet you at camp.

@Dragonslayer, those are practice GOALS, not ACHIEVEMENTS!

Thanks for chiming in!

Thanks for the comments and encouragement everyone!

Congrats on being member of the week, @xmark! I enjoyed reading your bio. Maybe we’ll bump into you at a show at Randy’s (our band is playing there on August 21st) or a jam around Savannah sometime soon!

Congrats on GPotW @xmark! I admire your goals and enjoy talking to you at camp. Hopefully I’ll see you at one soon!

I think the thing I enjoy most about your playing, Mark, is that you always seem to be enjoying yourself. I know you’ve expressed some frustration to me in the past, but if you hadn’t said anything, I would have never known.

It’s a pleasure watching you play.