Lost before I I start

I am less than a month into my Gold Pick experience and the mandolin. I am trying to use the TEF Tabs. I found how to listen to the measures I am working on but I could sure use a lead in of a couple of measures. By the time I start the file I am lost before I begin. I would sure appreciate any tips you can give me.

By the time I read the Help index I am so tired I need a nap and there is no time left to practice. I want to be able "to get her around the mountain by Christmas.

Hey, Dan,
I believe the TEF player can slow down considerably. if I understand your predicament correctly, that might at least give you a fightin chance. Keep workin’ – it’s worth it!!

What Dan said,slow it down! tap on the settings icon( the one that looks like a gear) in there you can slow the tef down. GOOD LUCK and KEEP PICKEN!!!

And if you cannot find a gear icon, go to the top of the page and look for
Play>Relative Speed and you will find an EZ place to set yourself a comfortable speed, either by changing the percentage or the tempo. 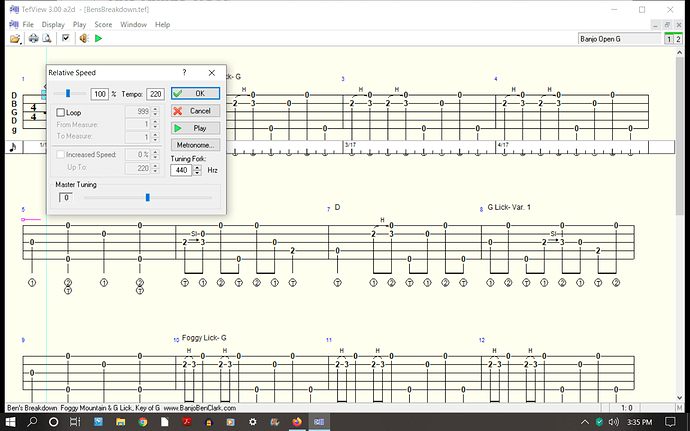 I find 50% works wonders at first!

Thanks guys. I do know how to slow her down. Was really hoping I could insert a few measures for timing.

Hi Dan,
Here’s the best way I’ve found so far…
click Edit
click insert measures in the drop down menu
Note: you may only add measures after another that exists.
insert new measure after measure 1
highlight the entire first measure, then use cut & paste
(right click on highlighted area for menu to cut)
left click first note-spot in new measure to highlight, then right click for menu then paste

If you need to add more, now you can insert new measures after the first without the cut & paste operation.

If I understand you correctly…
One other idea would be to let it play through the first time and get yourself ready to start just before end for the second time. If you wanted to repeat a measure or a bunch, click a few notes before the measure, and while click is pressed, drag to a few notes after the end of the measure(s) you wanted repeated. It highlight the portion you want repeated, And when you press the play button, it will play it again and again. You will have the needed time to enter in. Hope this helps.

Great. Ever once in a while a blind squril will find a nut. Today is my day. It was even easier than you said. No cut and paste.
EDIT>EDIT MEASURES in the dialog box I entered from measure 1 to measure 2 >INSERT and it placed two new measures ahead of my original measure 1. Thanks for the tip, exactly what I was looking for.

you may have a newer version.