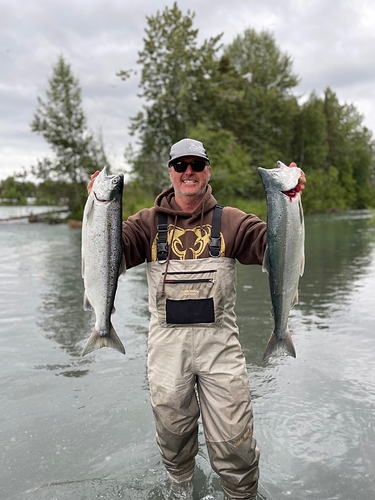 What was it that first got you interested in playing the guitar, mandolin or banjo?
My dad was a Federal agent, had a little side gig flying for an agriculture guy in Kansas named Larry Steckline. “Steckline” as he was referred to around my house, had a Beech Baron, My dad flew this plane as a little part-time gig from time to time. Steckline was buying radio stations in Kansas known as FM stations. So happens, Roy Clark was in town as part of a promotional grand opening act. I watched him play the banjo and was fortunate to meet him and get my picture with him. Dad being a fiddle player always was playing Sunday mornings. We would be listening to 88.5 FM (bluegrass station) in the DC area while getting ready for Sunday church service. So when I joined the US Coast Guard, I bought my first banjo, played off and on really getting nowhere musically. A few years ago, I decided it was time to learn how to play.

How long have you been playing and what’s your motivation to play?
I have owned a banjo for quite some time, actually playing it is another story. I started playing it two years ago and I am determined to be able to play in a jam session setting!

What’s your favorite lesson on Ben’s site and how has it helped you improve?
Fretboard geography really made the light bulb come on. For the longest time the fret board has been a bit of a mystery to me.

Are there any other instruments or genres of music that you enjoy playing?
Just the banjo. I am a bit of a dead head so I would like to be able to play some Jerry Garcia covers.

If you could play in anyone’s band, who would it be and why?
That’s a very difficult question. I guess it would have to be my all star band featuring David Grisman, Jerry Garcia, Tony Rice, Katie and Ben Clark!

What type of gear or accessories have you found that work best for you?
I like my blue chip thumb pic and Sammy Shelor picks.

If you didn’t have to sleep, what would you do?
I would hunt every day of elk season.

Anything else you’d like to add?
If you haven’t had a chance to attend a Cabin Camp put it on your list of things to do. Ben and the crew put on a fabulous event. The only thing that will disappoint you is that you didn’t sign up for one sooner!!

Thanks for letting us feature you Kenyon!

Kenyon on being selected as this weeks Gold Pick Member.

I like my blue chip thumb pic and Sammy Shelor picks.

I think these cookies on my browser are getting out of hand. Now I am getting customized marketing, even in an interview!

Kenyon, you encourage me. You don’t give up, when you found yourself not getting where you wanted to go with your music you did something about it. Like you I have found that we all need teachers to get us past our blind spots.

Congrats and welcome! It was nice to get to know you at camp!

Congrats to you and very interesting Bio. Looking forward to hearing more from you and hearing your progress!

Congrats on being the gpotw! Loved your interview responses