I'm Embarassed To Be So Happy

“No question the General Store is my go-to place for all my picking needs, and home of my wish list banjos. Top of my wish list is the Deering Sierra, but “Mahogany or Maple” fill me with indecision…so no Sierra for me.”
That was me in June after I visited the luthier who did the set-up on my old Japanese Epiphone. He also let me hold a maple Sierra. I wanted to hold it again, so we went back in late July. My wife went for a walk while I waited for the man to finish with a customer. Once again he let me hold the maple Sierra, which terrified me. You know how it is. “You’re the reason we can’t have nice things” is a phrase not unknown to me and my clumsy hands.
While the man was talking with another customer, my wife came in and said, “Did you see this?” and motioned me outside. Posted on the window was a typed price list for a limited time sale. And there was the Deering Sierra Maple for a price that made my eyes pop. The shop owner is an older gentleman, well beyond legal retirement age. His retirement is locked up in inventory & he probably wanted the cash. (He also has an amazing collection of pre-war Gibsons)
I live in the Northeast, where the hard maple used in the Sierra comes from. I live 12 miles from the American Maple Museum and eat real maple syrup on my pancakes & oatmeal.
I get my maple syrup from a family farm that has been boiling sap every spring since 1844. They still collect the sap with horse-drawn sledges in the snow-covered forests.
In other words, maple is in me, so it really became a no-brainer. Out came the credit card
and home came the Sierra!
Yes, I felt a bit of embarrassment at not supporting the folks who have supported me in my practice. However, I’m sure Ben doesn’t want me to be stupid. I got a new Sierra at a used Sierra price, professionally set-up and then re-calibrated 6 weeks later after it had acclimated to its new environment.
I’d like to say I noticed a difference right away, but I didn’t. This banjo was so special to me I was afraid to put it thru its paces in my imperfect fashion. It took a few weeks overcoming my shyness at “dating the prettiest girl in school.”
Now we are best of friends, and the Sierra continues to impress me in so many ways, subtle and elegant.
I really have beat on the strings and it says , “Gimme more!” I’d like to, but I’m still struggling with that F chord!
Looks like I will be re-upping my Gold Pick membership when the time comes!

@BanJoe, I’m so happy and excited for you! That is a very nice instrument and will surely help inspire you to the next level. I can understand the embarrassment, but when an unusual opportunity comes along…well, timing is everything.

Had a similar experience recently, and felt the same way…

Confessions of a Budding Banjoholic? Banjo

Dear Abby: I have an OB-3 Gold Tone banjo (Twanger) that was part of the original batch from the Banjo Ben General Store, and I absolutely LOVE it. I have recommended it to others, and would not hesitate to do so again. The decision to purchase it was based upon an extensive banjo pilgrimage that took place during and shortly after the inaugural Cabin Camp at Ben Clark’s house in the spring of 2019. My original banjo was a 3rd-hand open-back Deering Goodtime in need of some TLC, and it has s…

That’s awesome, Joe! There’s nothing like getting a great deal to make an instrument sound even better. I’m looking forward to seeing some videos of your new addition.

Ben’s goal is happy students. I have no doubt he’s thrilled about your new baby if she makes you want to play more.

She sure does! Unfortunately I have been under the weather with a stomach bug for a couple days. It’s amazing how quickly I get rusty, and how quickly the rust falls off once I start loosening up my fingers again.
About all I could post now are videos of “fake” songs, like “Minor Mingle.” (I truly like the sound of that one!)
Old Joe Clark is staring at me. Tomorrow, I start staring back. Soon, there’ll be a showdown!
However, if I get swept up in the IBMA excitement this week, practice may be inspired, but practice time will suffer!

Congrats on the Deering. Alway good to add a new instrument to the collection. Where abouts in NY? I used to live very close to Marathon, NY where they hold an annual maple festival.

Deering Sierra maple is my banjo, too. Love it!

I’m further north in a little village called Carthage outside Watertown near Ft. Drum.
And we got your maple!
https://maplemuseumcentre.org/post.php?pid=9

It’s not the kind of place you would think of going to, but once you get inside it is fascinating. There is a cross-cut section of an ancient maple tree that still has the wooden sap taps embedded in the wood from when the Indians tapped the tree waaay back in the day, as well as taps from the early 1900’s up thru the early 1960’s. The crosscut is about 7 feet in diameter.

Now China seems to be dictating how the maple industry must operate. China has become a big market for maple syrup & other maple sap products, and they have very strict sanitary guidelines or they will not purchase. No more collecting sap in buckets. It’s all done with closed-system vacuum tubes, stainless steel collection tanks and gas-fired boilers. Very sterile. (Insert your comment about “Chinese food products imported into America” here.)
We prefer the old method. Very labor intensive, but nothing tastes as good as genuine maple syrup boiled over a wood fire for hours on end. 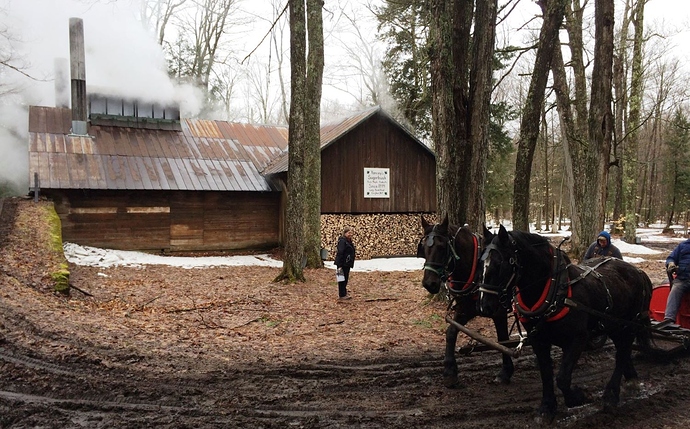 One negative I’ve heard about the Sierra Maple is that the sustain is too long and does not decay fast enough to get good note separation in bluegrass tunes. I think that’s bogus.
I want to push out a wall of sound, and this banjo delivers!

Cool…Looks like a big sugar shack. If I remember right, the ratio is 40 quarts of sap for one quart of syryp. Used to travel through that area quite a bit when visiting 1000 Islands. Absolutely beautiful area.

Your mind is still sharp! It’s 40 to 50 gallons of sap per gallon of syrup. Every year is different & some years have a higher sugar content than others.
And you’re right about 1,000 Islands. If you are the outdoorsy type, you cannot beat this area for four season of splendor. But you gotta learn to appreciate real cold and real snow!
Thank goodness I can keep my heating bill down by more practice of hot licks!

Banjoe, In my youth I spent some time at Ft. Drum. You may enjoy the four seasons, but based on my memory of those days, three of the seasons happen in about one month, the reset was all winter.

That’s not too far from accurate.
We like to think of it as “Nine months of hockey and three months of bad ice.”

I once saw a Ft Drum sweatshirt that read “Ft. Drum…Where Hell freezes over.”

I actually did post one playing the maple while trying to determine the best audio mix of my banjo & the backing track. I was wondering if anyone would spot the Deering logo on the head.
https://banjobenclark.com/forum/t/mixing-the-creek-sound-test/12363

I guess we all have keen ears & bad eyes!

Congrats on the great banjo!

You made a very good decision there, I am happy for you mate. Enjoy Mr. Maples