I never played with J D Crow, but I did stay in a Holiday Inn Express last night

You just never know who you might meet in the Nashville area. It was real treat to be able to attend the 2020 Cabin Camp last week during the 4th of July weekend. I did indeed stay at the Holiday Inn Express in Mt. Juliet while visiting the area, and on Saturday morning (the 4th), I was leaving the hotel in the morning headed for the final day of camp. While passing through the lobby, a man remarked as I passed by with my case, “Oh, a banjo player, I see!”. I smiled and told him that I did indeed own a banjo. I was kind of in a hurry because I didn’t want to be late, but he was such a pleasant and enthusiastic conversationalist…and I didn’t want to be rude and walk away.
So we chatted a little and I learned his name was Melvin Cumbee and that he specialized in selling pre-war Gibson banjos. After a few moments, he asked me if I’d like to see a banjo once owned by J D Crow. Now I really was in a hurry, but something like this just doesn’t happen every day…so I said “I would LOVE to!”. He asked me to wait there. He came back in a few minutes with a well-worn banjo case. We both opened our cases on some tables in the back of the breakfast area , and he told me he had the Gibson RB-75 played for many years by J D Crow. He began telling all about the history of the instrument and then asked if I’d like to hold it. After pulling up a chair for each of us, he handed it to me and I can’t remember everything he said about J D Crow after that. But I did hear him ask me if I’d like to PLAY IT. So, that’s when I tuned up the high G, plucked around a little, and then played Cripple Creek on J D Crow’s old banjo! 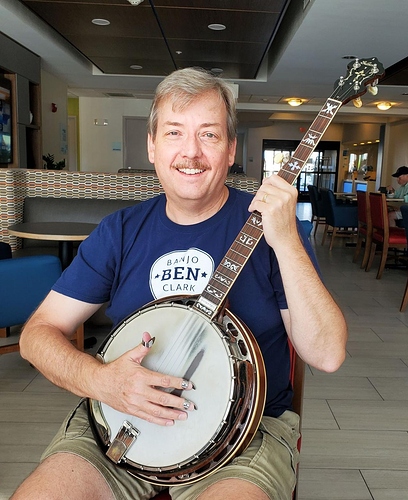 After he put the RB-75 back into it’s case, I told him about the Cabin Camp, and he said that he had heard Ben Clark was a really nice guy. I let him know that was true, and he asked about my banjo. I told him it was a Twanger from the Banjo Ben General Store and he asked if he could play it. Of course he played it, and he played it VERY WELL. He remarked that it sounded much better than he had expected it to, and that he was surprised by the volume. He later conceded that it sounded very good. Then he told me about knowing Robbie Boone and he also knew a little bit about the history of the Twanger and said he was glad to have been able to play one. He then told me he also owns the original Banger once owned by J D Crow that the Twanger was based on. I was in shock of course, and he told me more stories than I have time to recount here. 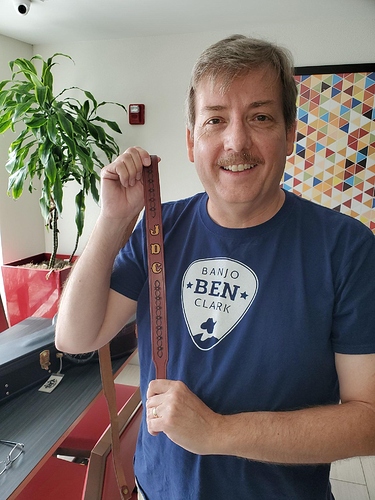 Like I was saying, I never played with J D Crow, but I did get to play one of his his old banjos for a few minutes…and made an interesting new acquaintance in the process!

That’s an awesome adventure to add to your camp experience @xmark!! Happy that the opportunity presented itself, cuz how cool is that?!!

Wow! What a treat!

OK, now that you’ve died and gone to heaven, there’s one thing I gotta know: When you get beyond the pearly gates, do banjos stay in tune?

@BanJoe, I don’t know, but only the high g string was out…and it was waaaay flat.

HOW COOL IS THAT!!! It just goes to show you if you just slow down and take time to be nice to a stranger you never know you just might get the experience of a lifetime! Imagine that. Great story! Thank you for sharing.

Ho-lee cow! What an awesome story! Talk about putting the icing on the Cabin Camp cake.