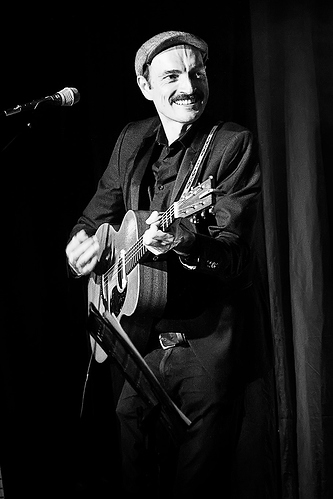 What was it that first got you interested in playing the guitar, mandolin or banjo?
At the age of four I wanted a guitar when I saw “the man on the TV” with one. I still don’t know who the man was (best guess is South African classical guitarist, Trevor Nasser), but that’s what got me interested. For banjo, I was booked to play guitar in a community theatre production of “Oklahoma!” and got handed some banjo parts along with the guitar parts and told to just try and mimick them. Right then I decided to go out and buy a banjo, and try and do the parts properly.

How long have you been playing and what’s your motivation to play?
I’ve been playing for just over 20 years now (even though I had a guitar since 1990).

What’s your favorite lesson on Ben’s site and how has it helped you improve?
Can’t really choose just one, but any of the crosspicking videos

What’s your goal when playing?
Always trying to serve the song and not my ego.

Are there any other instruments or genres of music that you enjoy playing?
I play drums, keys and bass. I play a lot of rock music in various tribute shows. And I really love playing more folk-styled stuff.

How long have you been a Gold Pick member?
I think I’ve been a GPM since 2012

Do you have a favorite technique? What is it?
I love Hybrid Picking!

If you could play in anyone’s band, who would it be and why?
I would’ve loved to be in Paul Simon’s band. He is my favourite songwriter and the world-music influences in his solo stuff really appeals to me.

What type of gear or accessories have you found that work best for you?
As counterintuitive as it may sound, after switching from thin to thick guitar picks (0.6mm to 2mm), I just don’t really break strings anymore.

If money was no object, what would be your dream instrument(s)?
Three things: A D28, Paul Simon’s Martin PS2, and Tommy Emannuel’s Maton EBG808TE

Thanks for letting us feature you Hugo!

Congrats and Welcome, Hugo!! I’m your neighbor to the north, in Mozambique, and have spent a lot of time in south Africa! I hope to see you around here some!

Hugo on being selected as this weeks Gold Pick Member

Congratulations on being the gold pick member of the week, Hugo! Hope you get that D-28 someday soon!

Congrats Hugo! I was in Kenya this past February. I have a really good friend from South Africa (lives close to Jberg) in Israel of all places.

“Always trying to serve the song and not my ego.”