Happy Thanksgiving to @BamjoBen his family, @aliciabowman , @Jake and all the crew at the General Store and all my friends and acquaintances over the big pond. We don’t celebrate this holiday in the UK but I know it’s a pretty special time for all you folks over there. I am thankful Lord that I get to share quality time with these folks every day. God Bless you all,

It may not be merry but it can be happy! You all have a happy day!

Just a holiday tidbit now that we are coming into the season. Out of the three gifts presented to Jesus, by the Magi, also referred to as wise men, gold, frankincense, and myrrh, some historians believe the gold was the least valuable out of the three at that time.

The first Thanksgiving Day football game (talking American Football) was played in 1876. Was a college game where the score was 2-0. Pro ball didn’t emerge until later. Probably evolved through pass the hat games into what we have today.

On a side note, that has nothing to do with holidays, other countries haven’t cottoned to American football due to the stoppage once the individual play has concluded. European football, or soccer as it’s called in the states, on the other hand has continuous play and is thus more popular in other parts of the world. American football however is gradually catching on other places.

Me and my Missouri Fox Trotter pony, Callie. 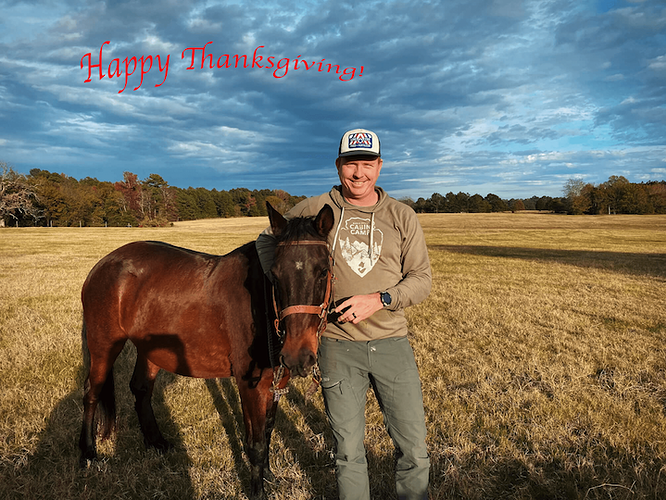 My brother had knee replacement last Thursday. One of the main motivators for getting the surgery was so my brother could go on long walks with his dog.
On Wednesday, the delivery guy came with the home equipment he will need for recovery. As he was leaving he ran over & killed my brother’s beloved dog.

His Thanksgiving is not merry nor happy, but it is blessed in so many ways. Sometimes we forget our blessings simply because we are not happy.

Behind every silver lining there is a storm cloud brewing.

I’m so sorry to hear that @BanJoe!

Sometimes we forget our blessings simply because we are not happy.

I imagine the guy felt bad about it although, maybe not his fault. If a service person comes around, my dog will always run after the vehicle when they go to leave, to where I now go out and sit with him until they are out of sight. Another habit he has is, the mail lady gives him treats whenever she delivers a package too big to put in the mailbox. Now whenever she delivers the mail I have to watch because, he will go out to the road and stand by her van hoping to get a treat, He even recognizes the sound of her vehicle when it’s still down the road just getting there.

the mail lady gives him treats

That’s a wonderful way to teach the dog to bark at delivery people.
It’s hard to fool dogs. They know how to score treats!

Yeah, he beats me out of them daily going over what is supposed to be his quota. The bad thing is, I know I’m being played.

I agree it is tough to be happy in those situations, but one can be thankful for the (physical) blessings above and beyond many people in this world have. Wishes for speedy recovery for your brother!