Last week I visited Stelling Banjo Works in Virginia. I really just wanted to tour the shop, hear a Stelling live, and hopefully get to meet Geoff Stelling. The shop is everything you’d hope it would be, an old one room school house in the mountains that’s been converted in to a wood shop. Mr. Stelling came out to greet me and took me inside to show me around. He had his personal Master Flower there that he used to record a couple songs on the Banjo Anthology Album. To my great surprise, he handed it to me and asked if I’d like to play it. Wow, it sounded like notes were coming out of the walls. It was really crisp, and loud. Mr. Stelling said “I think that one is the best sounding banjo in the world.” I may have cried a little, I can’t remember. Then he showed me a 1979 White Star that he just built in 2020. He had the neck hanging on the wall since he moved to VA from CA and finally decided to assemble it around an old ‘79 maple block rim. This was the first moment I realized my savings account was at risk, but I was strong and left there without it. But before I left I showed him my Gold Tone Twanger. He put the strap over the shoulder and played a little Banjo in the Holler. He thought it sounded real nice and that they’d done a good job with it’s build. He had nice things to say about @BanjoBen and the work he’s doing. I asked Mr. Stelling “who really made your banjo well known?” He said it was Alan Munde. I just found it pretty cool to be standing there as a Banjo Ben student, talking to the gentleman who built a Stelling Staghorn in 1975 for Ben’s teacher from South Plains College, and then having Mr. Stelling play a banjo that Ben had designed. It just felt like it came full circle. One more thing, remember the 1979 White Star? I went back on Tuesday and brought it home with me. 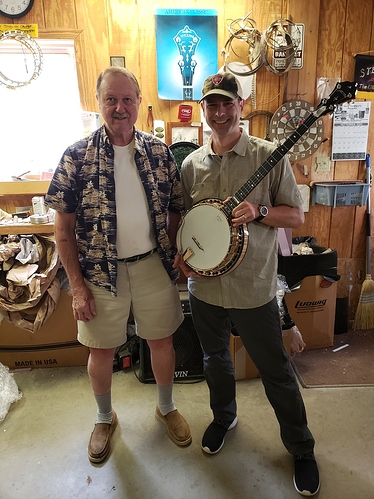 Great story and a great photo Brent. I should add both Murphy Henry & Alan Munde helped sway me towards buying a Stelling. Steve Noon of Eagle Music tried hard to persuade me to buy a Deering Banjo and even offered me a special deal because he didn’t have a Stelling in stock and he didn’t know when he would get any in. I thanked him and said I was happy to wait till he got a Stelling in stock. Several months passed and then I got the call a Master Flower had arrived in the store did I still want it. Next day I set off early for England to pick up the banjo she was and still is a beauty. Wishing you many years of happiness with you new banjo Brent.

Dude that is so cool!! I’m so happy with you for getting that White Star. I am so blessed at the work @BanjoBen is doing and your right, it’s so cool to see that coming full circle, in a sense. I am really struggling with jealousy right now…

How awesome! BTW, I met Alan Munde today for the first time.

That is awesome. I bet you’re having a blast at the camp. What a great opportunity and hope to hear all about when y’all are back home.

Man, you should have messaged me, I would have loved to ride up with you!! I actually called them last year about a tour and they were on hold then, due to Covid. I’ll probably make the trip now in a week or so.

That is incredible! You have made a very wise investment.

@Grinnin I’m kicking myself for not calling you now. Side note: would it be too creepy to create an app to notify me when a fellow Banjo Ben student is near me? I did reach out to @Archie and @AdamAsh (thanks guys) just to talk it out before I made the purchase. Let me know if you need someone to ride shot gun when you go.

Hey, will do man. I probably should ride the bike, I wouldn’t be able to go into debt if I have nowhere to carry one, lol.

That’s a great story @Brent.H and can’t wait to hear the White Star

Hi @Lee_G If your interested there is a Stelling Sunflower 1998 5 string banjo for sale on Gumtree. Location: Newton St Boswells Scottish Borders. The guy is asking for £3000 but I have a feeling he may sell for less. I have no connections with this guy. I just keep an eye on the UK banjo market. He also has a Deering and a Gold Tone for sale.

There’s been talk of Mr. Stelling retiring for awhile, but this time he has a couple of employees who are retiring at the end of the year. Will that cause value to go up? Not sure, but that definitely played a part in the decision to get one now instead of waiting. When they come in to the General Store, it seems they don’t stick around long.

I think it might @Brent.H I believe my Master Flower is probably worth more now than I paid for it. As I said to my wife when I bought it with luck it should cover the cost of my funeral.

Will that cause value to go up?

Yes, you made a wise decision.

Ha! We’ll get all those banjo short sellers in a pickle!

That’s cool! I’m glad you were able to pick that one up!