If you have read some of my posts, you’ll know that I’m a little weird about sound. So it came as a bit of a surprise to me that I would order a banjo mute from the General Store. Maybe it was to get the free shipping, I dunno. But I watched Jake’s video & figured, “Of course a geetar player would think a banjo mute is a good thing.” 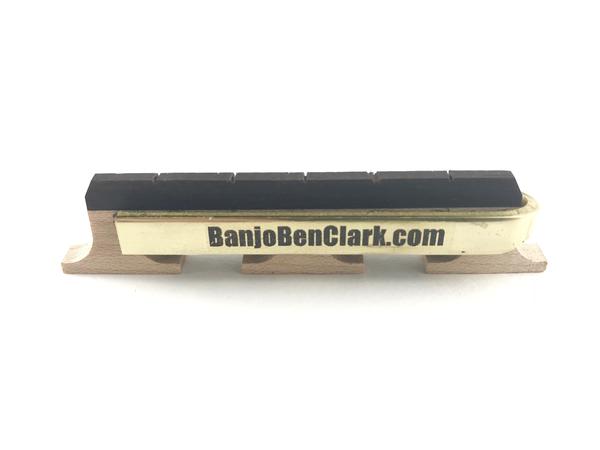 Practice in peace without making enemies with everyone in the house!  This is the most widely used banjo mute. This mute is made of brass and works by simply sliding it onto the bridge from the side underneath the strings.  Can be slightly...


However, I was intrigued, so I went ahead and ordered the El Cheapo with the web address printed on it. I think the Cadillac version costs a couple bucks more. Turns out the El Cheapo is less expensive, but still first quality.
While it does makes the banjo quieter, it does NOT take away that special banjo ring. I expected it to muffle the sound, make it sound muddy like listening through a pillow. But that’s not the case.
Yes, it lowers the volume significantly, but it also imparts a different tone to the banjo, almost as if you were playing with a capo in a different key. Yeah, some things sound a little off, but this is not for the concert hall, it’s for the practice room.
After a while, I actually began to appreciate the strange tone, and I was not as self-conscious about making mistakes loudly.
Maybe if it was called a “banjo practice bar” instead of a “mute” I would have been less hesitant. After trying it,though, I can honestly recommend it to anyone who wants to really work their banjo without cracking the plaster in the walls.

And that’s another Expert Opinion from a Beginner.

Great review and I agree!