Yes. Every fret on the guitar is a half step in music. A half step is just the next letter in the sequence below:

Guitar capo language is actually not as hard as it seems, once you get used to it and start recognizing the often-used keys. The 4 chord shapes you mentioned are going to be the main chord positions played out of (more specifically, just G and C), so all you have to do is get used to counting the frets and the corresponding musical half steps.

Make sure you memorize that sequence above because not every letter has a flat between them; for example, one half step up from B goes straight to C. When I first started using a capo I kept a paper chart in my guitar case.

Make sure you memorize that sequence above because not every letter has a flat between them; for example, one half step up from B goes straight to C.

Nice post Libby. I’ll add one little thing regarding memorizing the notes. For some folks, seeing the notes on a piano keyboard has proven very helpful. No black key between two white keys (like E to F and B to C) means there is only a half step between those notes.

By the way to clarify from my first post, a WHOLE step is climbing 2 numbers in the pattern or 2 frets on the guitar.

Seen some great responses so far for you. You could back all this up by putting some stickers on the top of the neck for a while that gives you top and bottom string (Standard Tuning)and adds visual reinforcement. 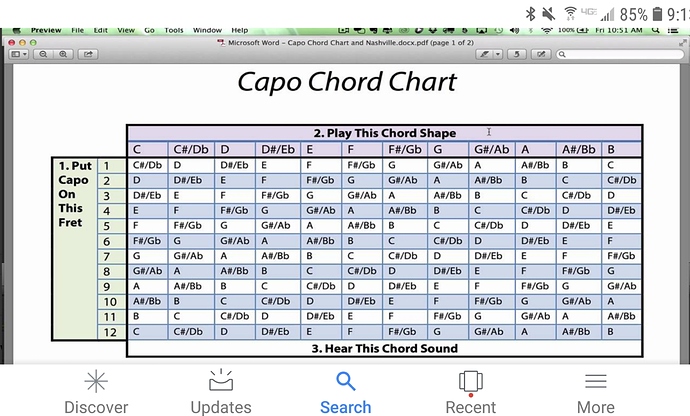 Flatpicken_Libby your explanation was great. It made it so much easier for me to understand. I actually started to quiz myself by choosing a fret and chord shape and checked to see if I figured it out correctly using the capo chord chart from Chuck_R. Thank you all for your help.