Built my first ebike and it is a blast!

About 10 years ago I began to get interested in designing and building an electric assist bicycle. I was working about 70 hours a week at the time, so it didn’t happen. Then came the unexpected loss of a job and the eventual finding of a completely different career.

Fast forward to my birthday this year any my wife agreed that I should splurge and purchase an electric bicycle kit to modify my bike. If you are unaware of what is currently available, the Bafang BBSHD kit is a mid-engine drive that uses your gears to get you up the steepest hills without trouble and to help you keep up with traffic on most roads.

I purchased the kit from bafangusadirect.com and on a Friday evening, I installed it on a 7 speed Trek I owned. The basic kit that includes everything but the battery is under $700. 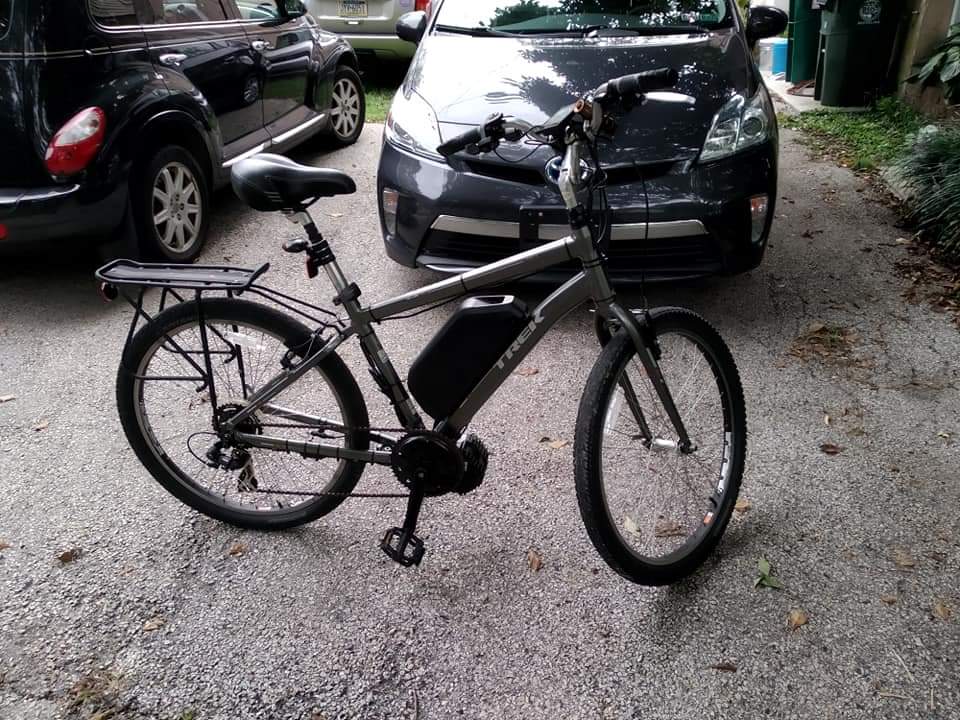 It is a blast to ride, especially for anyone north of 60. It makes you feel a bit like superman when you are pedaling at near 35mph and easily cruising up the steepest hills. 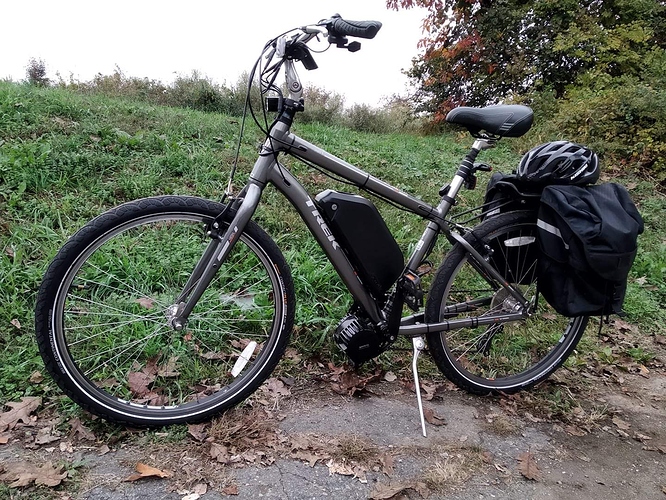 but don’t wreck at that speed! Keep those tires in good shape.

Any idea what kind of range you will expect?

A few years back, we got an upright trike for mom in law (and we use it too). I saw the hub drive kits and wanted to put one on the trike so it would be easy to keep up with folks on “normal” bikes. Unfortunately, I was the only one excited about it. I ended up adding a derailleur kit to it instead. It was a big improvement, but I still think electric would have been awesome.

Yep, I know what you mean. Previous to this bike, 20+mph would feel a bit fast, but I have updated a few things that make it feel much more safe. The tires are Continental Contact Plus Travel e-bike rated tires with a high puncture rating. They roll easily and feel very connected to the road.
To be clear, unless the road is dead smooth and I am the only one on it, I’m not doing 35mph all the time. My top speed (downhill) was about 40mph. Generally, cruising around at 20 or so is very easy and quite comfortable. And unless the hill is extremely steep, uphill at about 15-17mph is pretty normal.
Range is another thing. I rode my bike about 32 miles the other day on an extremely hilly path and the battery was down to about 25% when I was done. I was racing around most of the time. I suspect that if I were riding on flatter terrain at a more leisurely pace , I could get about twice that distance. I’m using a 48volt/24.5ah li-on battery pack.
As far as the trike goes, these kits are regularly used for trikes as well. The bike can be used as pedal assist (when you pedal, the motor kicks in and helps with the load) or with a throttle alone. It really is a silly amount of fun! Here is a fellow enjoying his new BBSHD modified bike.

That’s cool! I just bought two Rad Runner ebikes for my wife and me. By law, our motors cut out at 20 mph, because they have a hand throttle. Pedal assist only bikes can only do 28 after motor cuts out, (talking factory manufactured bikes), so you got a hot ride there.

So @DrGuitar1, i’m really into mountain biking and i have considered putting an electric motor on my bike just because the faster you go the funner it is.

The inly thing, about how much does your motor weigh? i would be real scared going over a big jumped if my bike suddenly weighs 30 pounds more than normal.

Yep, 20mph on level surface is the legal “limit” for the engine by itself. And at it’s lowest PAS setting, that is how it is set. I’m not overly concerned about being stopped by the police; imagine a cop stopping a fellow 63 years old and saying “I stopped you because you are going too fast on your bicycle”.

Legally speaking, manufactured bikes must be set at the 20mph limit to keep manufacturers from getting sued from accidents.

The motor weighs about 12 pounds, the battery weighs another 12+ pounds. You are looking at about 25 pounds of motor and battery. The weight is fixed to the bike low on the center of the frame (good balance) but it does add significantly to the weight of the bike. Of course, the weight is offset by having a strong motor and increased acceleration. Gotta weigh the good and bad.

Ok thanks. Does the battery size effect the speed and weight? I suppose if the motor is balanced well it wouldn’t be near as big of a deal. And also how much did your battery cost?

Does the battery size effect the speed and weight? I suppose if the motor is balanced well it wouldn’t be near as big of a deal. And also how much did your battery cost?

Definitely affects speed and weight. The BBSHD motor is a bit of a beast and can handle just short of 60volts. With an upgraded controller, it supposedly can handle 72volts (that takes you into the 50+mph territory).
I run a 48volt/24.5Ah battery. It was just short of $700 when I bought it. It comes with a slide on/off rack that is lockable to the frame. I have since learned that I could have spent about half as much for a triangle shaped battery that mounts to the frame via strong velcro tabs that puts out about the same energy. Look up 48volt triangle batteries.
All of these batteries are lithium batteries and are relatively light weight compared to lead acid AGM batteries. The larger the battery, the heavier it is.

My entire bike weighs 74 pounds. I hit a bump hard, and it jolted me like nobody’s business. Was quite wobbly at first. Of course, I hadn’t ridden in decades, but it’s slowly coming back.

Eeesh!! Mine weighs about 25 lb. No wonder you got jolted