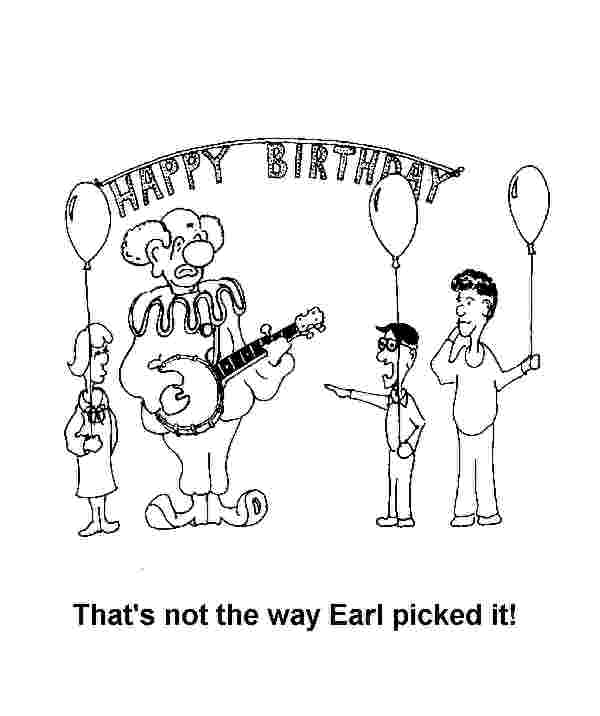 So somebody has the bright idea to mate a banjo and a guitar and viola… Birth Of Banjitar. Except that for whatever reason, if you bring it into the Purified Regions Of The Hallowed Parking Lot Pick-In, you’re gonna end up on the back lot picking with the other heathens who bucked Tradition™ and showed up with stuff like a twelve-string guitar, an accordion, an autoharp, and an electric bass with a battery-powered amp.

So it seems only reasonable to postulate, my dear pick-buds,… “What actually constitutes proper instrument selection for Bluegrass within the Orthodoxy described to us by our Forefathers?” In short, “What is the Official Bluegrass Purity Test?”

Well, that’s a fer piece harder to describe than it seems, if you’ve been listening to The Bluegrass Channel on Sirius or looking at the weekly charts from BluegrassToday(.com). Just as jazz went through its share of what we call today “iconoclasts” (mostly sax players that made it a point to blow up any traditional or conventional approaches to melody and structure, although a few influential pianists are highly regarded today as “iconoclastic”…), Bluegrass has been blessed with its share of iconoclastic visionaries who looked to expand their horizons as well as that of their art (for me, David Grisman comes to mind the fastest, although the entire industry seemed bent on taking his lead once they realized their electric fence hadn’t been powered on in years).

Clearly, to the Traditionalists™ on whom the future of Monroeism is hung, the “Bluegrass Purity Test” is a simple one… “Would Bill Monroe Abide This?” If not, then you can just march your heathen piece of wood to the back of the parking lot where you hear accordion “music”.

Herein lies the problem… one person’s “Purity Test” is another person’s icon-just-waiting-to-be-bashed-because.
The Osborne Brothers took alotta crap for showing up to Bluegrass Festivals with drums and electric bass. And NOW,… people hang on Sonny Osborne’s every word each week like He was the Last Word In Orthodox Bluegrass Tradition™. How’d THAT happen?! Oh, that’s an easy one… he was a trendsetting pioneer in modern American music. THAT’s how that happened.

The Seldom Scene had a really easy way of dealing with “The Bluegrass Purity Test”. They simply claimed to be doing “Americana” while claiming that “real Bluegrass” was JD Crowe and whatever incarnation of his band was playing at the time.

If any of my protracted ramblings make a whit of sense to you, then you probably know where I’m coming down on the “Banjitar” thang… If you wanna pick one up and make Real Bluegrass™, then by all means have at it… Learn something jawdropping on it and then show up in the Parking Lot Pick-In and cllaim your rightful place in the Circle Of Breaks. If you wanna do something new, then Go For It Too.

It’s all good. I 100% honestly believe that. IT’S ALL GOOD! I mean, just lookit The Dobro™… somebody had the bright idea to glue a hubcap onto a guitar and once Bill Monroe had one in His Band, it was as acceptable as beer and F-150s.

Ok here’s my view: I know bluegrass when I hear it, can’t necessarily draw out a black and white boundary with words, but when you hear it you know. I don’t think any instrument is to be excluded, if they can make it work stylistically.

Have a look at Sierra Hull’s band, she’s got a saxophonist who plays bluegrass better than most fiddlers. He’s made it work stylistically, he understands bluegrass, and he knows how to use his instrument to the benefit of the other musicians. Eddie Barbash is the real deal.

Check out the Jeff Little trio, he’s got a pianist (or is the pianist, I don’t remember) who can play Reuben so well you don’t miss the banjo.

Check out Jeff Taylor, he’s an accordionist and can play any style, but mostly bluegrass that I’ve heard. And it’s all awesome, and never does the accordion detract from the performance or sound like anything other than bluegrass.

Check out Buddy Greene, (one of my favorite musicians) he plays harmonica so well I used to not be able to differentiate it from a fiddle.
All top notch bluegrass musicians on “non-traditional” instruments.

I fully believe that the instrument is not what makes it “not bluegrass” one caveat, if you bring a synthesizer into the mix you’re on thin ice, but if it fits into the bluegrass sound it’s acceptable.
It’s the “musician” that should be included or excluded from the genre or the jam, not the instrument. If you got the knowledge and skills to make it sound like bluegrass, go for it! If not, go take your genre-confusion back home and study so next time you know to identify as acoustic pop (or a nuisance) and then people will know not to expect music.

If you have a guilt-jo, and you can play something identifiable as bluegrass on it, by all means do so! But if you can’t, then don’t expect to be accepted (and also please don’t strum it, that’s a harsh sound)

My comment on the guilt-jo thread was just a warning to not expect to be able to easily play bluegrass, or be accepted at jams if you get one.

I’m not a bluegrass purist, but if you are, and you don’t like something, call it newgrass and they’ll become popular

It’s the “musician” that should be included or excluded from the genre or the jam, not the instrument.

Before moving to Arizona, I lived in South Carolina. On any given day there would be a “Bluegrass” jam nearby. All you needed to join in, was an instrument that didn’t require electricity to make it work. All were welcome. Your instrument had to be in tune and you had to be able to play the chord progressions. I play guitar and a wash-tub base and others would have an upright Base Fiddle and variuos guitar types… Even a twelve string… I never saw any “wind” instrument, but if they could fit in and play in tune they would most likely be welcome to play along. The purists would leave and everybody else would have a great time. I say purist or not, play something and join in… You’ll love it!
As for the Banjitar, It’s more out of a physical need than wanting to play what some call “Bluegrass Banjo”. I can’t handle a 12 pound instrument for more than 10 or 15 minutes and trying to get an hour of practice is nearly impossible. The Banjitar is light weight and to the untrained ear sounds just like a banjo. I can make it fit in with the little bit of jamming i get to do anymore. And most important… I’LL HAVE FUN DOING IT!!
BTW My new Banjitar will be arriving here next week. WOO HOO!

You ARE gonna provide some video, right.

Video may be coming…

I played a gospel session at a music festival a few years back. Our small band played the Old Rugged Cross, a Clarinet player in the audience just kicked in and all went down fine.

As for the weight of the banjo at 72 I still play my Stelling but if your not able or comfortable no need to struggle. It’s you choice Gary. Look forward to seeing your videos.

It’s hard to talk about orthodoxy when the “Father of Bluegrass” lived in my lifetime. Monroe was a trailblazer to be sure, but close on his heels were others who pushed the “established” bluegrass sound right in front of him. I listen to all types of music, from Led Zeppelin, to Bach, to Flatt and Scruggs, to Billy Strings, and Tyler Childers and I could care less about what it’s called; although it does help to give you an idea of what you’re going to listen to. As far as the Banjitar goes, it’ll either make it or it won’t; kind of like the autoharp. Hope I’m not missing the point here, just my 2 cents worth. Let’s enjoy ourselves making music!

I, too, am 70 and have a Stelling. I just never got “conditioned” to hold it comfortably. I use a strap but that only leaves my neck and shoulder sore. When I sit with it on my lap, it guillotines my legs. Even the wall it hangs on creeks when I put it on the hanger. I might as well put a strap on a piano and try to carry it around. I’m good with my Mando and 7 pound Blueridge. My fiddle is so light it floats on air but I think that there Banjer is trying to send to the twilight zone.

I have to concur Billy. It appears the young man’s already got his 10,000 hours in. I’m looking forward to following his career.

I really, really like Josh Swift’s style of Dobro playing. It’s not necessarily what I would think of as the “traditional” style of reso guitar, but it sounds great just the same and fits in with Doyle Lawson and Quicksilver’s sound quite well in my opinion.

You should check out the Gold Tone OB 150 I think it was, it’s got a lightweight tone ring. Also the deering John Hartford model, and there’s other lightweight banjos out there.

As I say it’s your choice Gary it’s not my intent to pass judgement, I am only offering up my personal experience. There are lighter 5 string banjo’s out there and if my memory serves me rightly the Stelling Afton Star is a lightweight model. A mere 9 pounds if anyone else is interested.

Anybody who’s seen Eddie Adcock is familiar with this trick. Usually, he would sling that guitar around to his back, and walk up to the mounted banjo and do his thang,… finish up, and sling the guitar back around and take a break as he nods to himself. 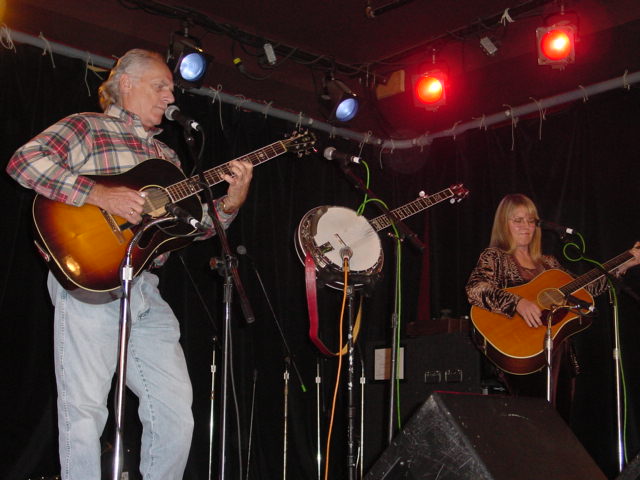 It’s time to rethink the banjo

That’s a great video! Thanks for posting that. So while you’re on the subject, what would you do to rethink the banjo?

My top three “improvements” include:

I don’t know if anyone mentioned it, but open back banjos are really light. That’s what I travel with when I’m just going to be playing in my work apartment or a hotel room.

Rod and Reel attachment… What a great idea!
I would add cruise control.

Uhhmm, this all reads like something I would write, so I’m a little like, rolling my eyeballs and stuff right now. So, I’m gonna just gonna be succinct here.

Banjitars are an abomination. NO BANJITARS. Not havin’ it, no sir

Banjitars are an abomination. NO BANJITARS. Not havin’ it, no sir

Waitaminute… I just found one I think we can live with ->