What brought you here Musically?

I hope that you will all bear with my post if I admit that coming from Britain artists of wonderful talent such as Doc Watson, Earl Scruggs, Tony rice were known by me but not fully appreciated. Sometimes saw them on late night programmes hidden deep in our lesser channels. We had our own traditional folk scene with great talents such as Dick Gaughan (Treat yourself and look him up).

My personal tastes as a young man were generally rock. It would be easy to fall into the Led Zeppelin namedrop but we had others like Uriah Heep and Jethro Tull. They both mixed acoustic work and altered tunings with heavy work and put them into their catalogues. As time progressed Rush became listened to (RIP Neil Peart) and there are some bass runs galore in songs such as Fly by Night. Blackfoot toured the UK and Europe and now that’s a group with some serious picking moments. Diary of a Working Man springs to mind as I write.

Still also went to Folk concerts and heard such works as Matty Groves , Sandy Denny does a great rendition. Then the internet and You Tube allowed for so much more. Matty Groves becomes Shady Grove with a click of the mouse and a wonderful new world (To me) of music was opened up.

Oh if you want translations for much of what Dick Gaughan sings I will get my wife to help me post. He often sings in what we call Scots English. My wife often speaks like this.

Hope this stimulates sharing and conversation.

I grew up listening to Country Music but I mostly enjoyed the singing and the stories. I watched Hee-Haw every week and didn’t understand how incredible the music that Roy Clark was producing. I guess the first song that i really was struck by the music was Country Boy by Ricky Skaggs but mostly because of the “Looney Tunes” ending done by the guitar at the end of the song. I thought that was cool. Fast forward to about 2007 when Ricky Skaggs and Bruce Hornsby did the show CMT Crossroads together and they played some bluegrass songs. My mind was blown, I’d never heard Skaggs play mandolin before and I sure never heard blazing fast, “in your face” bluegrass before. Then I saw Marty Stuart playing mandolin on his TV show. Next thing I know I’m finding Sierra Hull, then Sam Bush, then the Ronnie McCoury. I talked so much about the music my wife finally got me a mandolin started kit but I didn’t know anyone other than youtube to see how to play.

Well the next thing you know I find good ole @BanjoBen on youtube and I have been driving my family crazy learning new things. I spent 48 years of my life not knowing that I loved music so much. I now also have a fiddle and I’m taking lessons in person lesson. I also try to incorporate my Banjo Ben mandolin songs in on my fiddle.

My coolest moment ever in music was catching Sam Bush walking out before a show and there were only about handful of people in the theater yet. I asked for a picture and jumped over 2 empty rows of seats. Yes, I even made up my own “Peace Love, Flatt & Scruggs” t-shirt for the concert. 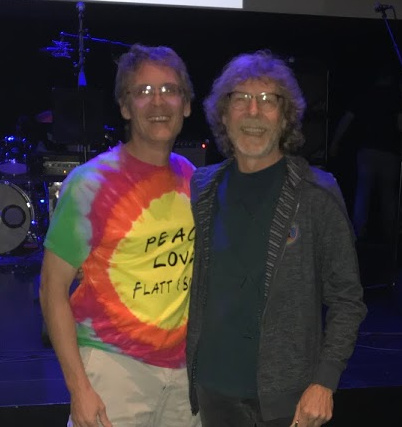 Thank you for leads on musicians and the obvious moment you enjoyed.

I used to play in a band, a secular country rock band while in college, nothing to serious. After I left following God’s lead, the band struck it big, real big, really big for this area … lol it happens I guess.
I like learning music and found Ben online. Even though we grew up in same area of Texas I had no idea who he was or the Purple Hulls until I start watching his YouTube videos. The world got even smaller when my wife’s coworker went to college with Ben.
Nowadays I enjoy jamming at church, the house and wrestling with my kids. Life is good with God and my family. If I was still with the band I’m sure I wouldn’t have what I have now. Thank God He got me out of the secular band life.
I listen to a lot of Blues( I’m from Texas so Stevie Ray Vaughan is a must),Texas Country, Rock(all decades) as a teen and young 20’s. Never paid much attention to Folk or bluegrass stuff until last 5 years or so but love it more than any other types lately. I now listen to all kinds of music.
Here’s some musicians to check out . All genres:
Cary Hudson, Blue Mountain(Cary Hudson), John Fullbright, Third Tyme out, Newfound Road, Cross Canadian Ragweed, if I think of some groups I’ll send them your way.

Much appreciated and will take a view. Glad that Gods lead has seen you well. Have some affinity with Texas enjoyed the wide open space of the state as I lived in Abilene for some time.

Heartily enjoyed the cosmopolitan life of being in San Antonio a gem that few Europeans know about.

I hope you on the artists I mentioned as well there is so much to learn on such a humble instrument.

I have played classical piano since I was around 8 or so. A couple years ago I started not enjoying piano around the same time I started learning guitar. I played a mix of bluegrass and contemporary Christian. I guess I kinda knew about Banjo Ben, but as a guitar-only player he didn’t really appeal to me. Late last spring I decided I wanted to “try out” the banjo, so I borrowed and cheap open back. That is when I really discovered BB. last summer, I started playing guitar, banjo, and piano at my youth group, which lead to me playing on our church’s worship team. Now my two goals on the worship team are to glorify God while playing the banjo as much as possible. Between last spring and now I’ve started playing mandolin, fiddle, harmonica, electric bass, electric guitar, and have become a BB GP member.
I guess the artists who have influenced me the most would be the Gibson Brothers (before they betrayed bluegrass), since I grew up listening to them and going to their Christmas concert. In addition, the Purple hulls and Rend Collective have been inspiring. Dave, who plays electric guitar on our worship team, and our worship leader Pastor Jeremy have inspired me to start playing electric guitar and singing.

It’s really hard to type that much with banjo picks on.

Thank you for your response it means a lot to me to feel welcomed on this site. Will openly admit that Gibson Brothers meant nothing when read.
Will have to read and take a view on them . Wow betrayal that seemed very strong wording.
A lot of Christianity on this site I see a number of responses I have had make comment. I hope your worship is rewarded.