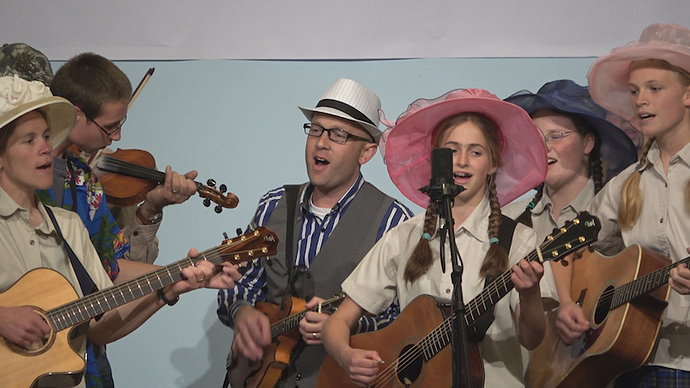 Still0506_00081.jpeg800×450 372 KB
What was it that first got you interested in playing the guitar, mandolin or banjo?
I first started playing mandolin in 6th grade. I thought it sounded great in different songs I had heard. The subtle background melodies, the chop, and the ripping solo leads were intriguing. I also was interested in playing drums. I earned money for my first mandolin by parking cars at a classical music venue in my hometown of Norfolk, Connecticut. One evening The Band came to town. I was able to get in for free (after all the cars were parked). When I saw Levon Helm strumming on a mandolin, playing drums, and singing at the same time I knew I had picked the right instrument.

How long have you been playing and what’s your motivation to play?
I have been playing mandolin for 30 years. A big motivator to play better is the teenage folk band I lead at the high school I teach at in England. We cover classics from John Denver and other artists, as well as experimenting with bluegrass covers of songs by the likes of Dylan and The Allman Brothers. We have come across a lot of new original material that is really fun as well. As of now, we have not written any of our own songs, but perhaps in the future. Each year around 10 students sign up for the band and we practice two times a week. The whole student body is involved in two concerts we put on each year, and our Folk Band usually performs 6 or 7 songs. In addition to the concerts, I try and schedule in a handful of events at local venues just to give the students practice and more confidence playing together in public. For some of them, it’s the first time performing, and a few have even learned a new instrument our band was in need of.

What’s your favorite lesson on Ben’s site and how has it helped you improve?
The first solo I tackled from Banjo Ben was all three parts of Will The Circle Be Unbroken. Until then I had only played backup chords and harmony. The site is very valuable for me because I can use the material for the students in my band. Last year we used the banjo, guitar, and mandolin lessons for Man Of Constant Sorrow, Unclouded Day, and Go Tell It On The Mountain. They sounded great together. We have done that with a few other songs as well. We plan on working up some of the solos using the fiddle tune lessons over the summer, like East Tennessee Blues.

What’s your goal when playing?
One goal of playing is to become a better player. But above that is the shear fun of playing, especially with other musicians.

If you could play in anyone’s band, who would it be and why?
There are so many great bands out there. I would have to settle on Old Crow Medicine Show. They have so much great energy and skill and they put their all into a live show, which puts a smile on everyone’s face.

If money was no object, what would be your dream instrument(s)?
I recently came across a video that featured The Sorensen FX mandolin. Man it sounded good and looks fantastic! A very special instrument which I could never afford. Currently I play a TKD F5 Falcon, which is a blast.

If you didn’t have to sleep, what would you do with the extra time?
Well, my wife Janice and I have four children, I teach Biology, Earth Science, and Algebra, and I have multiple hobbies, which include bike repair believe it or not. So there is not enough time in the day.

How did you find out about Banjo Ben?
When I was looking for solo work/tutorials for songs our band was working up.

!!
Enjoyed reading your story. It’s fantastic that the high school you teach at is doing a folk group, and also that the group plays more than one song at a performance, with multiple performances!
Your current mandolin caught my attention, I play & enjoy a TKD F5 Falcon too!
If you get the chance, it’d be great to see a video posted here of the student band in action…

Jordan on being selected as this weeks Gold Pick Member. Great to hear you are introducing British kids to Bluegrass. Love to see some videos of your school concerts.

Congrats on being the Gold Picker of the Week!

Congrats on being the gpotw, and thanks for doing such a nice job on the interview questions! I really enjoyed reading your responses.

Congratulations on being gold pick member of the week. I like your enthusiasm!

There is a long tradition of introducing British kids to bluegrass. As usual, it is a labor of love but there’s no money, so it’s time to play something else.

"### Early days
The Strawbs formed in 1964 as the Strawberry Hill Boys while the founder members were at [St Mary’s Teacher Training College, Strawberry Hill, London. The name was shortened to “the Strawbs” for a June 1967 concert in which they wanted to display the band name on stage.
Their long-time leader and most active songwriter is guitarist and singer Dave Cousins (guitar, dulcimer, banjo)
In the early days Strawbs played with Sandy Denny. Denny, (later lead singer of Fairport Convention)
Although they started out in the 1960s as a bluegrass band, the band’s repertoire shifted to favour their own (mainly Cousins’) material. While in Denmark in 1967, the Strawbs with Sandy Denny recorded 13 songs for a proposed first album, "All Our Own Work"It was apparently not issued in Denmark and the fledgling band could not get a UK record deal. (Meanwhile, Denny left to join Fairport Conventionand the album was forgotten until it was issued on Pickwick Hallmark in the UK in the mid-1970s.

Back in 2008 when I first took up the banjo the then Scottish Bluegrass Association ( now defunct) used to hold hold workshops in some schools across the central belt with visiting bands from the USA. I vaguely recall Greg Cahill and his band doing something.

Hey @Simone and @Archie, Jordan tried to post a video but he’s having some computer trouble, so he asked me post this message for him:

In response to the request for some footage, here are some highlights from the last three years. A good number of the students at the school I work at are from the USA. One of our main goals is to put a smile people’s faces. Thanks for the opportunity to do that even now at this time.

0:20 – same here for the dobro and bass player (we try to switch up our instruments when it works)

1:15 – our friends Pete Allen and his son Geary joined us. Check out AllenFamilyBand on facebook. They have been a big support!

- ending to a Rhonda Vincent song: You Don’t Love God (if you don’t love your neighbour)

2:30 – playing at a local beer festival a year ago (times have changed just a bit)

4:30 – opening for the Kilkennys in February (an Irish Band playing in London)

4:50 – this is a crowd pleaser the World over (thank you John Denver)

It’s mostly about the enthusiasm. Thanks again Banjo Ben and your team! Your site is a great resource.

Great Job Jordan those youngsters are clearly having fun.

Jordan, I second @Archie 's “Great Job” comment, and while I was watching, I was smiling till the end!!

Thanks so much for posting it for us!!
Thanks also @aliciabowman for relaying the msg, & Archie for putting the link into a photo/thumbnail link (for lack of knowing whatever that’s really called​:grin:

Congrats and welcome Jordan!! That’s a really cool bio you’ve got there! Great job with the band!

Jordan, that highlights video was AWESOME! Thanks for sharing!